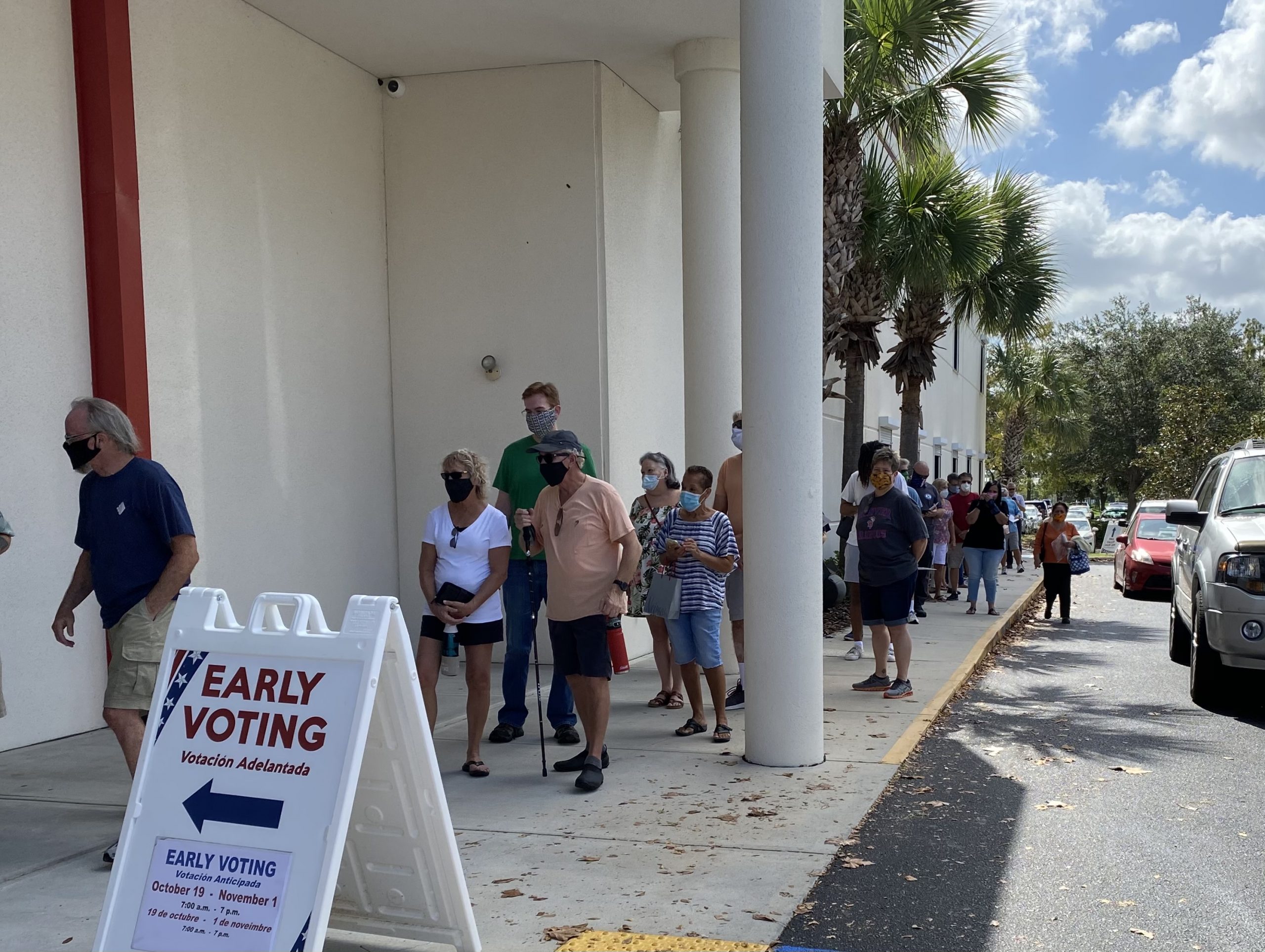 Voters turned out in record numbers Monday to begin casting ballots in person for the presidential election.

Political leaders and election officials are urging voter confidence amid misinformation. Meanwhile, a bill from Marco Rubio aimed at ensuring an accurate vote count is set to die in committee.

Bernard Zielinski lost confidence in absentee voting this year. He made sure to be in line for the first day of early voting.

“I just wanted to make sure to be here because with all this mail-in thing who knows what the hell is gonna happen. I just want my vote to count,” he said.

In Seminole, Zielinski proudly sported his Trump 2020 hat as he joined the nearly 8,500 Pinellas voters and 350,000 voters across Florida who cast in-person ballots on the first day of early voting. Accusations of voter fraud, however, continue to pour from the highest elections of American Democracy and Zielinski still had his doubts.

“My paper did not match theirs. How the hell is there two different things people are voting on?” He thought it might’ve had something to do with his hat. “I said is there something here I’m missing? I guess they, you know cuz my hat says Trump.”

“I believe in the people”

Ballots can look different depending on a voter’s precinct. Not every precinct has the same races or number of candidates. With voter turnout being highest in years with presidential elections misinformation regarding how ballots work can be an issue.

“That’s a very difficult educational obstacle for us to overcome. When it comes to things that seem simple to us is precinct ballot styles,” Dustin Chase, spokesperson for the Pinellas County Supervisor of Elections Office, said. “It is very, very complicated and everything appears to be ballot fraud or voter fraud until it’s proven not to be. That’s a very difficult hurdle for us, too.”

Democrat Charlie Crist, a St. Petersburg Congress member who is up for reelection, spoke at the Seminole Community Library Monday. It’s one of more than 20 Pinellas locations where voters can drop off mail-in ballots. He said the best way to combat fear mongering is to get out and vote. The system, he said, will work.

“The mail-in ballot system has gone smoothly. People can have confidence in it. They can feel safe in it,” Crist said. “I will be confident in the election results because I believe in the people and I trust them and I know they’re gonna vote and they’re gonna do it smart.”

First-day numbers in Florida shattered previous records. Chase said 3,000 more people voted in-person in Pinellas Monday than voted in-person in the 2016 election. More mail-in ballots had been cast in Hillsborough by Tuesday afternoon than were cast total in the 2016 election. Statewide, mail-in ballots received by the first day of early voting this year doubled what they were in 2016 and 60,000 more people voted in person this year than in 2016.

Chase said early, in-person locations have more to do with geographic size than count and noted the number of sites didn’t adversely affect wait times. While Pasco, which has about one-third fewer voters than Pinellas had about one-third more in-person ballots cast Monday. Chase said that’s more reflective of voter preference. Voters in Pinellas and across the region reported 15-minute wait times, with longer waits not exceeding 30 minutes.

“If an individual had been turned away at the polling place because there wasn’t enough capacity, I would be inclined to say that there would be more need,” Chase said. “But at this point when you take a look at the data, it seems like people are voting how they want to vote.”

Florida’s numbers reflect trends nationwide, where early voting numbers— both in person and by mail — are up this cycle. Election Supervisors have noted that means counting votes could also take longer and not having definitive results by election night doesn’t mean the numbers don’t count, it means the process is working.

Another great idea set to die

Florida Senator Marco Rubio introduced a bill in August to extend Safe Harbor deadlines. Safe Harbor deadlines are the date by which states submit vote counts. With record numbers of mail-in ballots and unfounded rumors of fraud, more than 40 elections experts signed a letter supporting the bill stating it would only help to ensure an accurate and confident vote count.

Nova Southeastern professor Charles Zelden was among the 40.

“It doesn’t change anything politically in that it doesn’t advantage either party,” he said. “But what it does do is give some more space to the states to count their ballots without the rush.”

Zelden said having more time to count votes in the event of any issues could avoid situations like the 2000 presidential election between George Bush and Al Gore. The Supreme Court decided the outcome of that race once the Safe Harbor deadline had passed, not Florida’s voters. Bush won Florida’s electoral votes that year, which secured his winning the race nationwide.

“Imagine if they had two more weeks to do come up with a uniform standard and do recounts,” he said. “The Supreme Court might not have been the one who decided the outcome of the race.”

With the general election now under two weeks away, Zelden said it’s a shame the bill won’t have a chance.

“It’s another one of these great ideas that goes to committee to die.”

With more than 3 million votes already cast in Florida, Democrats currently have the advantage over Republicans in mail-in and in-person voting.