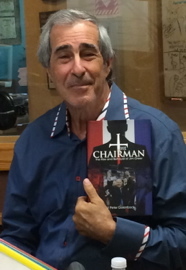 Today on Radioactivity, Rob Lorei discusses the much anticipated book about Jim Greer- a close confidante of then-Governor Charlie Crist who is finishing an 18 month prison sentence.

Jim Greer was a business man and city council member in Seminole County when he was plucked from relative obscurity by then-Governor Charlie Crist to be the chairman of the Florida Republican Party- a powerful position given the electoral importance of the state and the rich donor base.

In the new book THE CHAIRMAN: the Rise and Betrayal of Jim Greer- author Peter Golenbock explores Charlie Crist’s reign as Governor from 2007-2011- from the eyes of Greer.

Crist was elected as the self described “People’s Governor” in 2006- winning by defeating a GOP establishment candidate. But rumors of gay and straight sex and allegations of drug use dogged Crist. Plus there were stories of lavish spending by Republican party insiders.

THE CHAIRMAN covers the rise of the Tea Party in Florida, Crist’s falling out of favor with party members, the emergence of Marco Rubio, the behind the scenes story of John McCain’s winning the 2008 Presidential nomination, and Jim Greer’s eventual conviction on charges of stealing party money.