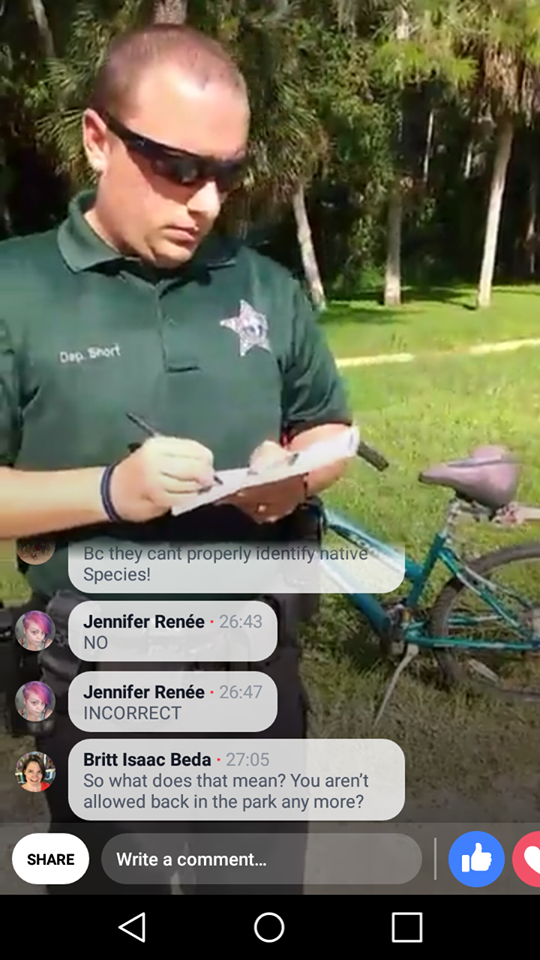 Yesterday local environmentalist Tanja Vidovic (and WMNF volunteer) was banned from a Pinellas County Park for objecting to the spraying of the controversial herbicide Roundup on park grounds. According to Vidovic she was in Safety Harbor’s Philippe Park when she observed several private contractors about to spray the chemical Roundup on what they told her were “invasive plants”.

Vidovic tells WMNF’s Radioactivity program that what the contractors had identified as “invasives” included many beneficial native species. Using her cell phone Vidovic videoed her interaction with the contractors and posted it live on Facebook when she was approached by a Pinellas park staffer who called in the sheriff’s department.

The parks staffer ordered her trespassed from the park, banned for a year. Vidovic uses the park to bike with her kids to and from their school. WMNF contacted several Pinellas County commissioners, public relations staff and parks personnel. None were available by air time.

Roundup is a controversial chemical which is banned or heavily regulated around the world ; it’s been linked to an increase in autism, obesity and diabetes ; Consumer Reports has issued a warning about its usage; and recently a San Francisco groundskeeper won a nearly $300 million dollar judgement against the manufacturer of the herbicide because he says it caused his soon to be terminal cancer.