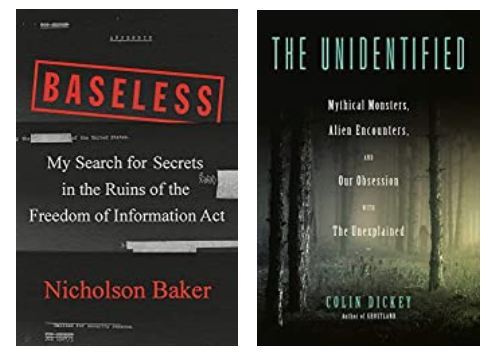 Nicholson Baker –  Baseless: My Search For Secrets In The Ruins Of The Freedom Of Information Act

With great pleasure, we welcome back to Life Elsewhere, acclaimed author, Nicholson Baker. His latest work of non-fiction is a remarkable hybrid of history, journalism, and a memoir. Eight years ago, while investigating the possibility that the United States had used biological weapons in the Korean War, Nicholson requested a series of Air Force documents from the early 1950s under the provisions of the Freedom of Information Act. Years went by, and he got no response. Rather than wait forever, he set out to keep a personal journal of what it feels like to try to write about major historical events in a world of pervasive redactions, withheld records, and glacially slow governmental responses. The result is one of the most original and daring works of nonfiction in recent memory, a singular and mesmerizing narrative that tunnels into the history of some of the darkest and most shameful plans and projects of the CIA, the Air Force, and the presidencies of Harry Truman and Dwight Eisenhower. In his lucid and unassuming style, Baker assembles what he learns, piece by piece, about Project Baseless, a crash Pentagon program begun in the early fifties that aimed to achieve “an Air Force-wide combat capability in biological and chemical warfare at the earliest possible date.” Along the way, he unearths stories of balloons carrying crop disease, leaflet bombs filled with feathers, suicidal scientists, leaky centrifuges, paranoid political-warfare tacticians, insane experiments on animals and humans, weaponized ticks, ferocious propaganda battles with China, and cover and deception plans meant to trick the Kremlin into ramping up its germ-warfare program. At the same time, Baker tells the stories of the heroic journalists and lawyers who have devoted their energies to wresting documentary evidence from government repositories, and he shares anecdotes from his daily life in Maine feeding his dogs and watching the morning light gather on the horizon. The result is an astonishing and utterly disarming story about waiting, bureaucracy, the horrors of war, and, above all, the cruel secrets that the United States government seems determined to keep forever from its citizens.

Colin Dickey – The Unidentified: Mythical Monsters, Alien Encounters, And Our Obsession With The Unexplained

In a world where rational, scientific explanations are more available than ever, belief in the unprovable and irrational–in fringe–is on the rise: from Atlantis to aliens, from Flat Earth to the Loch Ness monster, the list goes on. It seems the more our maps of the known world get filled in, the more we crave mysterious locations full of strange creatures. Enter Colin Dickey, Cultural Historian and Tour Guide of the Weird. With the same curiosity and insight that made Ghostland a hit with readers and critics, Colin looks at what all fringe beliefs have in common, explaining that today’s Illuminati is yesterday’s Flat Earth: the attempt to find meaning in a world stripped of wonder. Dickey visits the wacky sites of America’s wildest fringe beliefs–from the famed Mount Shasta where the ancient race (or extra-terrestrials, or possibly both, depending on who you ask) called Lemurians are said to roam, to the museum containing the last remaining “evidence” of the great Kentucky Meat Shower–investigating how these theories come about, why they take hold, and why as Americans we keep inventing and re-inventing them decade after decade. The Unidentified is Colin Dickey at his best: curious, wry, brilliant in his analysis, yet eminently readable.