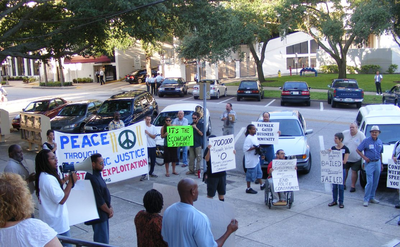 This morning the St. Petersburg City Council moved a step closer to using $700,000 of federal stimulus funds to revitalize the downtown BayWalk shopping complex. Part of the plan calls for the city to give away, or vacate, a portion of sidewalk to the owners of the mall. That has outraged activists who have used that public property to protest.

An hour before the City Council meeting people began to show up outside City Hall for a demonstration against St. Pete’s proposal to privatize the sidewalk. The chanting of about thirty activists could be heard inside Council chambers when the meeting began.

After City Council voted 7-1 in favor of considering the BayWalk revitalization, the local organizer of the International People’s Democratic Uhuru Movement, Kobina Bantushango, wondered where else the city would privatize public property in order to suppress dissent.

The current controlling owner of BayWalk, C.W. Capital, pledged in a letter to the city that they would invest $6 million into the mall if St. Petersburg moved ahead with security improvements and vacated the sidewalk.

Council member Wengay Newton, the only vote against, questioned C.W. vice president Mike McGregor whether giving away the sidewalk was a prerequisite for their $6 million dollar investment.

City Council member Herb Polson voted for moving the process forward to public hearings, even though he raised questions about the legal aspects of keeping protesters off the sidewalk. He says it’s the responsibility of elected officials to represent everyone, not just the business community.

Council member Karl Nurse elicited a negative response from a member of the public when he spoke in favor of giving BayWalk the sidewalk.

On Wednesday, the American Civil Liberties Union of Florida sent a letter to St. Pete Mayor Rick Baker and the members of City Council saying that giving away the sidewalk to the owners of BayWalk would be bad for fiscal and for legal reasons. They cited four court decisions saying that vacating the sidewalk “would not enable it to stop people from engaging in constitutionally protected expression there.” Nigel Watson is on the board of the ACLU’s Pinellas chapter.

In addition to the lawsuit alluded to by the ACLU, certain businesses may be boycotted. During the City Council meeting, Tom McGeachy with the managing agent of BayWalk, Ciminelli Real Estate Services, noted that some potential BayWalk “tenants aren’t going to lease space” if the city maintains ownership of the sidewalk. Eric Rubin is a minister with Serve the People House of Worship.

Veterans For Peace member Dwight Lawton says the city is acting racist. “Well we know where their priorities are.”

There will be two public hearings before the sidewalk vacation is finalized.

Baywalk tenants who wrote letters in support of the plan