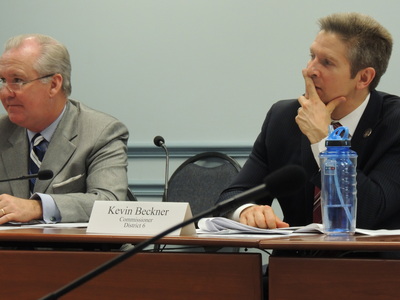 County Commissioner Kevin Beckner has officially filed to run for Hillsborough’s Clerk of the Circuit Court. This is being seen as somewhat of a curve-ball in the local political world, as Beckner could be running against incumbent Pat Frank, the long-time Hillsborough County political icon and fellow Democrat.

According to Saint Petersblog, Kevin Beckner said it was Frank herself who called him a few months ago to ask if he’d ever considered running for Clerk of the Circuit Courts. However, during an interview with the Tampa Bay Times, Frank stated that she doesn’t tell people not to run against her, and that anyone has the right to run in a democratic system.

Beckner, since becoming the first openly gay man elected to Hillsborough County office in 2008, has made a name for himself by working on issues like juvenile justice, personal injury protection fraud, and equality issues.

Frank has more than 30 years of Florida political experience herself however, having served in the Florida Senate for a decade, and, since 2005, as been Hillsborough County’s Clerk of the Circuit Court.

Republican County Commissioners Ken Hagan and Victor Crist are also rumored to be interested in running for the position.