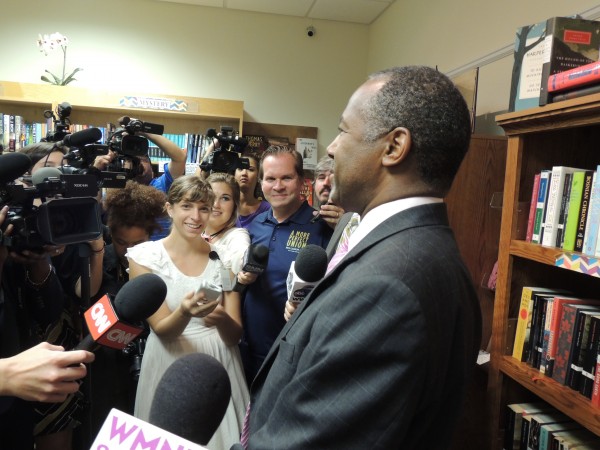 Ben Carson is one of the two frontrunners for the Republican presidential nomination; the retired neurosurgeon signed books for fans Wednesday afternoon in downtown Sarasota.

As hundreds of supporters crowded the sidewalks outside Bookstore1 on Main Street, inside reporters asked Carson a series of questions. He opposes completely legalizing marijuana but that he supports some medical uses of pot.

Hundreds of supporters crowded the sidewalks outside Bookstore1 on Main Street. Many said they like Carson’s demeanor and they contrasted him with the other front-runner, Donald Trump. They also like his conservative views like reducing taxes, restricting abortion and repealing Obamacare.

Colin Jordan is from Venice, Florida, got offended when WMNF News asked if he agrees with Ben Carson who said a girl who gets raped by her father should be prohibited from getting an abortion.

Across the street Across Main Street from the bookstore about 30 protesters held signs and chanted their opposition to Ben Carson’s positions on abortion, Islam and tax policy.

Brittany Gonzalez has worked with the UN and other organizations to help refugees in the Middle East. One concern she has is that Carson said a Muslim shouldn’t be president.

Listen to more from Ben Carson in Sarasota here: