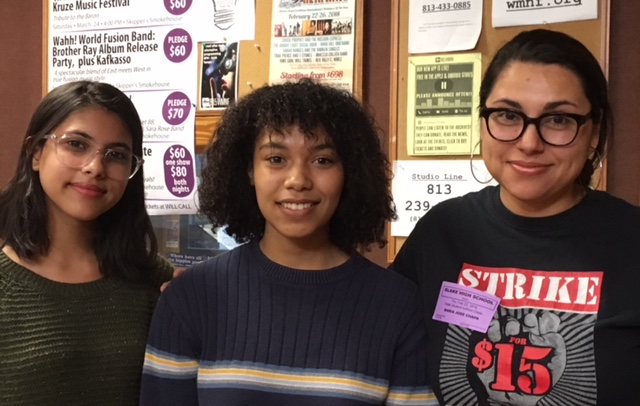 Welcome to Radioactivity. I’m Rob Lorei. After last week’s massacre at the high school in Parkland, high school students from around the country have been organizing walkouts, meetings, protests- calling for laws to protect students from gun violence.

This week the Parkland students took part in massive protests and lobbying in Tallahassee. We’ll hear more about that later. Already there have been protests and candle light vigils around Florida—as students, parents and teachers call for more to be done to prevent the slaughter of innocent people by people armed with military style weapons.

Both students at Blake High School.

From the Blake student’s press release:
When: Friday February 23rd @ 3PM
Where: Howard W. Blake High School 1701 North Blvd. Tampa 33607
Students and community activists will hold a peaceful protest and press conference to address inaction of lawmakers when it comes to gun violence. As the school days comes to an end at 3PM, students will march off campus and over to Curtis Hixon park in Downtown Tampa. Currently the state of Florida does not have any specific laws regarding assault weapons or magazine size. Assault rifles can be purchased by anyone over the age of 18. The shooting at Stoneman Douglas has galvanized students across the country to turn their grief into political action.

Later in today’s program:
Wayne LaPierre head of the NRA just made a speech in front of a collection of far right groups, CPAC convention

Last night CNN hosted a powerful Town Hall tonight to address the horrific shooting in at Stoneman Douglas High School in Florida.
One of the students, Cameron Kasky, came right out and asked Marco Rubio the million dollar question: Will he stop accepting donations from the NRA?