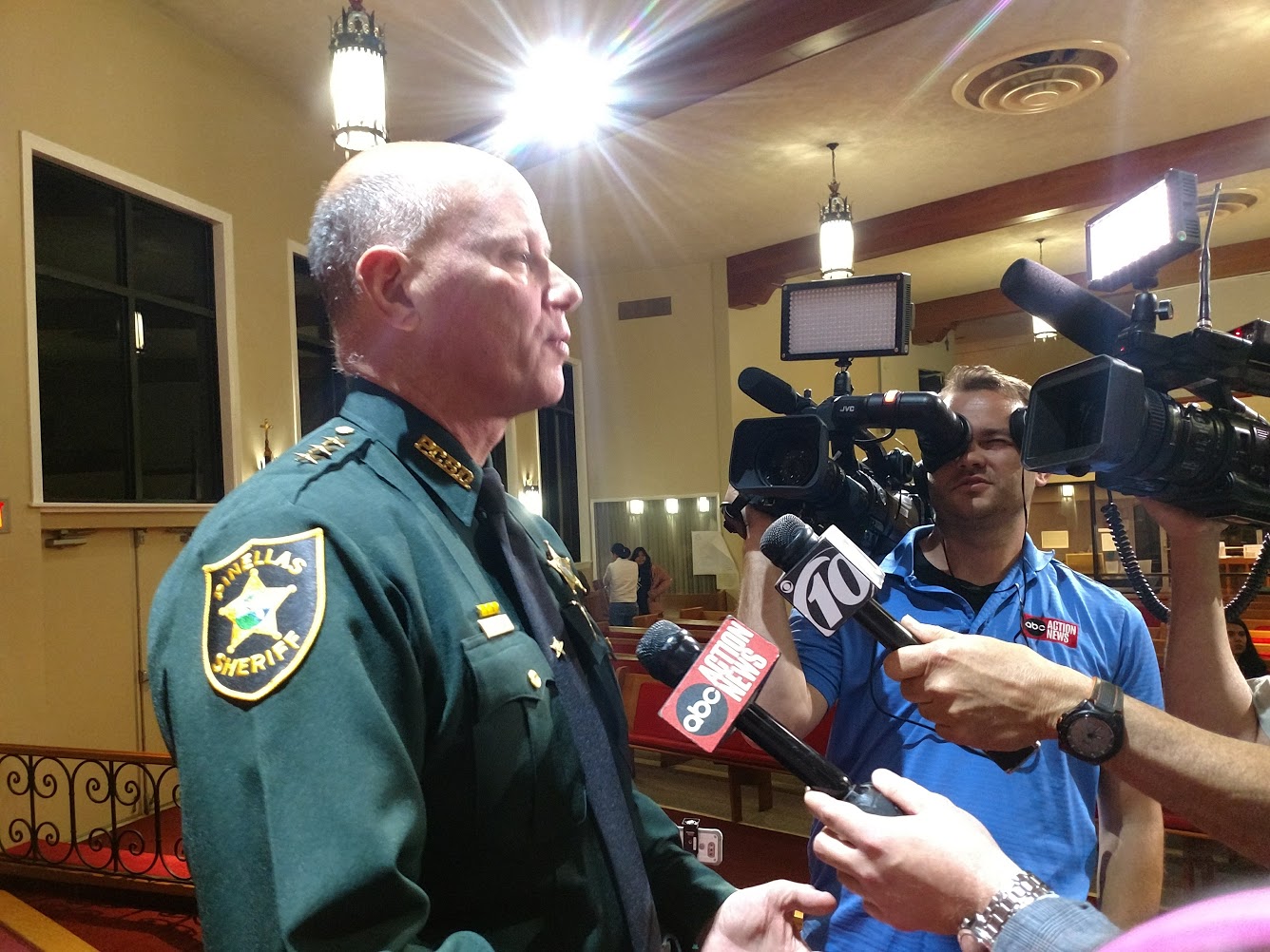 In January, Pinellas County Sheriff Bob Gualtieri held a news conference in Largo, where it was announced that Pinellas and 16 other law enforcement agencies in Florida would now have “housing agreements’ with Immigration and Customs Enforcement (ICE) that would allow federal agents more time to pick up arrested undocumented immigrants from local jails.

The agreement has been fiercely criticized by immigration advocates, and so on Monday night Sheriff Gualtieri – who was intricately involved in crafting the policy – met up with an immigration attorney and immigration activist at the Allendale United Methodist Church in St. Petersburg to defend the policy (and where this reporter served as the moderator).

What the policy does have to do with, he added, were those who have been arrested for committing a crime who are then determined by ICE as being undocumented.

“So, if you don’t get arrested and don’t commit a crime, you’ve got nothing to worry about, because it only applies to people that are in the jail,” Gualtieri said, before adding that he did not want another situation like Kate Steinle.

Steinle was the 32-year-old woman who was shot and killed in San Francisco in 2015 by a man who had been deported from the United States five times prior to  her death (A jury ruled in December of 2017 that the shooting was an accident).

Isabel Sousa-Rodriguez with the Florida Immigrant Coalition said that her organization has been “constantly” been getting reports of individuals who are pulled over while driving and then detained because they don’t have any identification on their person. “We do get reports of a lot of individual who end up in custody and transferred to ICE because of this,” she said, adding that has also happened to individuals who are victims of crime and domestic abuse.

Gualtieri denied that was happening in Pinellas County, and challenged Sousa-Rodriguez to provide names, dates and place when that has occurred. “That’s a false narrative.”

Tampa-based immigration attorney Mayra Calo said that the ultimate solution to some of the problems being discussed was to have comprehensive immigration reform legislation enacted by Congress. The U.S. Senate passed such a measure five years ago, but the measure was never brought up in the House and nothing close to that has followed.

Gualtieri essentially agreed with Calo, but emphasized that wasn’t his decision to make. “I hear you on that, and I don’t disagree with you on that.” The disagreement that he had with her was the belief that the undocumented who commit serious crimes shouldn’t be in the U.S.

The issuance of federal detainers to sheriffs offices for the undocumented began in 1987 and continued until 2014. That’s when state and federal judges dismantled ICE detainer processes taking place, primarily because probable cause wasn’t explicitly established in requests to detain specific incarcerated people living in the country illegally.

The federal government then ended the Secure Communities Program and replaced it with what they called the Priority Enforcement Program. Secure Communities and PEP were similar in that every person booked into a participating jail has his or her fingerprints checked against immigration databases. Using the results of the fingerprint check and taking into account established immigration enforcement policies, ICE then makes a determination about whether to take enforcement action against an individual.

While always civil, Calo and Gualtieri later began sharply debating legal points about the the pact between the Florida sheriffs and ICE, called a Basic Ordering Agreement.

“I’m afraid that the law enforcement who are doing this are committing crimes themselves, because it’s unconstitutional to continue to detain this person, and then with this improper documentation, hand him over to ICE,” Calo said.

Gualtieri countered that if his dept. was doing anything unlawful, they surely would have been sued by now, which has not been the case.

Towards the end of the evening, several audience members grew frustrated and angry with some of Gualtieri’s responses, and began shouting questions to him from the pews of the church.

When asked if he would comment on the case of Luis Blanco, the father of six who had lived in Plant City for 20 years before he was deported to Mexico in February. He had originally been deported in 1998, then returned to the U.S. , where he remained in the shadows until a traffic offense in 2014.

That response elicited jeers from the audience.

“Educate yourself,” another woman shouted.

Moments later, another gentleman stood up to defend Gualtieri.

“We have to live in the community, and we cooperate with your office, we want to make sure that we’re safe,” he said.