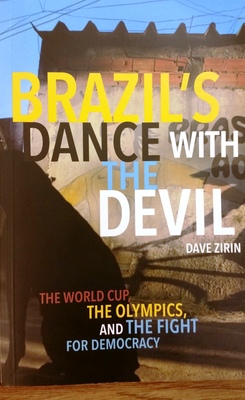 The most popular sport in the world begins its most important international tournament this month when Brazil hosts the World Cup. But it’s not going to only be celebrations of the beautiful game — social justice protests are sure to continue.

WMNF interviewed Dave Zirin, sports editor of The Nation, about his new book: Brazil’s Dance With the Devil: The World Cup, the Olympics, and the Fight for Democracy.

“Nothing unites the global gaze quite like the World Cup. Hosting it in Brazil, Brazil is the most successful World Cup team in history. It’s won more World Cups than any other country. When you speak about Brazilian soccer it’s like speaking about French food; U.S. militarism. It’s the standard by which all else is measured.

“That being said I would like to say for your audience that sometimes it’s overstated how much people in Brazil love soccer. People have to remember Brazil is a country that’s larger than the continental United States. Just as you would never think that, say, people feel about college football in Alabama the same way they feel in New Hampshire, there are different regional affections for soccer depending on where you go.”

Our guest is Dave Zirin. His new book is “Brazil’s Dance with the Devil, the World Cup, the Olympics, and the Fight for Democracy”. And Dave that fight for democracy took hold last year when Brazil hosted something called the Confederation’s Cup. What is the Confederation’s Cup and what happened in the streets?

“The Confederation’s Cup of 2013 was really meant to be a warm-up for the World Cup. It’s an international tournament, it’s done with all of the best players in the world and it’s spread out across the country. So it’s very much considered a dry run for the World Cup. What you had, though, was the largest protests in Brazil since the fall of the dictatorship almost 30 years ago.

“In speaking to people in Brazil, and I write about this in the book — I traveled there and talked to folks, the Confederations Cup had the effect of doing something that hadn’t been able to be done for decades, which is really crystallize discontent on a national basis. So, no matter where you were — Brazil is very diverse region to region — and yet wherever you were you would see these stadiums get built, you would see the militarization of public space, you would see the debt growing and it became this symbol for people, no matter where you lived, that the priorities of the country were really out of whack.

“So people took the streets and especially when the police started coming in with the rubber bullets and with the tear gas and these photos were broadcast. All it really did was add to the anger and the discontent. Now we’re at a point where it’s just a given that there are going to be serious protests when the World Cup happens. There are protests happening right now as we’re speaking. There are strikes happening. There are land occupations happening. People are pelting the bus with the Brazilian national team and putting political stickers, sticking them on the bus. This is not business as usual by any stretch.”

And part of the reason that they’re doing that is in order to build these stadiums and they’re building these “FIFA-quality stadiums” as you point out in the book. They’re evicting people from some of the poorest communities in Brazil. You visited some of those communities, what’s that like?

“Yeah, I did. I spent a great deal of time in these communities. They’re known as favelas and unfortunately, Sean, a lot of times the word favela is translated in English as ‘slum’ and yet I would never and no one should ever describe favelas as slums. I mean the definition of slum as a destitute and joyless place. These are better understood as impoverished squatter communities where people have built up on this land over the course of decades their own homes and their own communities and Brazil has got some of the toughest squatter’s rights laws on earth. So pushing people out of their communities takes what’s called a ‘state of exception’ to do that. The World Cup and the 2016 Olympics in Rio are being used as a ‘state of exception.’

“You might ask why do they want to push these folks out, it seems like it’s a recipe for social conflict, and it certainly is. But at the same time, Sean, there’s a real estate speculative boom happening in Brazil right now. Particularly in Rio. When real estate prices had been stagnant for 30 years, now it’s like a free for all. It would make San Francisco blush what’s going on there in terms of real estate prices. People want that land. Favelas, not always, but they tend to be on hills. As we know in the United States, the hill is where the good property goes, not the impoverished squatter community property. So they want to do something about that in a big way.”

The new stadiums that they’re building, can you describe the working conditions that are surrounding these stadiums and three of them are not even necessarily ready yet to have people in them.

“I mean nine people have died, that’s the first thing you have to say any time you talk about the working conditions there. Second thing that people should know about the working conditions is that as bad as they are or as good as they are the most horrific thing about them is that they are working people 24 hours a day, 7 days a week in rotating shifts. I got into one of the work sites, I needed like super special, double secret probation permit to get through just to check them out. And people got to understand these are more like work camps in the middle of the city. They give you your food and like everything and people are there on makeshift cots and people are there to work constantly for this rush to get everything done.

“There have been a lot of wildcat strikes at these stadiums. It’s probably because that the trade unions and the Workers Party government — the official bureaucracy and the trade unions — are in very close cahoots. So a lot of these, not all of them, but a lot of these strikes whether it’s by workers at the stadiums or the recent bus drivers strike in Sao Paolo that stranded 2-1/2 million people, these are wildcat in nature. And they’re done in opposition to the union leadership.”

I’m speaking with Dave Zirin. His book is “Brazil’s Dance with the Devil. The World Cup, the Olympics, and the Fight for Democracy”. My final question to you, Dave, is in your book you describe how this is not a unique situation, that mega-events around the world often are what you term ‘neoliberal Trojan horses.’ What do you mean?

“By neoliberal Trojan horses what I mean is that the prescriptions for neoliberalism which are about privatization, fealty to the market and the eradication of social safety nets for the purposes of making a country very open for foreign investments, very low taxes and an eager desperate labor force. Of course the economic idea is not ‘ha-ha we’ll exploit and crush the workers.’ but it’s trickle down economics. The idea that if we create a large class of billionaires that money will trickle down.

“That’s neoliberalism, that’s Milton Friedman, that’s the Chicago school and it’s also something that’s been resisted fiercely across the earth. The Occupy movement in the United States, you could argue, was a protest against neoliberalism. But particularly in Latin America. Now Lula, the long-time president of Brazil — who really set the stage for all of this and won the Olympics and the World Cup — he was a labor leader who was an IMF protestor in the streets of Brazil in 1998. When he assumed office he became known as — according to, I believe the Financial Times and the Economist, they both used the phrase — ‘the IMF’s favorite president.’ He became someone who was all in on IMF prescriptions.

“Now people in Brazil will resist these prescriptions. So I use the phrase ‘neoliberal Trojan horse’ because what the World Cup and the Olympics allow, and this isn’t just Brazil this is everywhere, is to introduce a series of economic prescriptions and development projects for a country that they would otherwise resist. But they don’t resist it because of the fact that, you know, you’re hosting this terrific sporting event. You want to do it and all of the nationalism that goes along with that. I should be clear, I came up with that phrase ‘neoliberal Trojan horse’ precisely because in so many of these countries — and I was in South Africa, London, Greece, I’ve been to a lot of these countries where events have gone on, Vancouver — what you have is people not being upset about the fact that these things are happening to them, hence the Trojan horse. But in Brazil that phrase doesn’t really work because people are upset. So they see the Trojan horse for what it is and that’s what makes this moment so, frankly, exceptional.”

The first match of the World Cup finals tournament is Thursday June 12 in Sao Paulo.