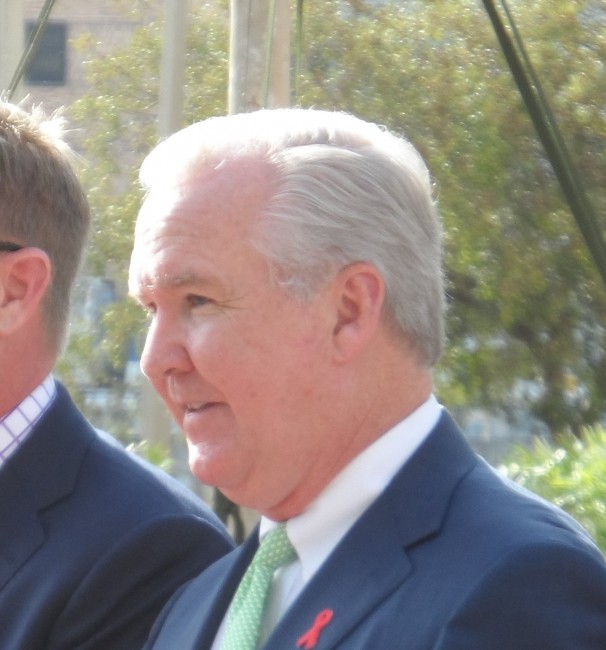 Tampa Mayor Bob Buckhorn is pushing for a county-wide transportation vote and for the city to use treated sewage water to augment drinking water supplies; those are two of the issues Buckhorn stressed during his State of the City address Tuesday morning.

“So we are pursuing, in my remaining three years, an initiative to use over 20 Million gallons of reclaimed water per day as a source of drinking water and a way to replenish and refurbish the aquifer. It’s known as ‘potable reuse.’ Thanks to Majority Leader [Dana] Young, we got a bill passed to control that asset.

“That is a project that could replenish the aquifer and secure Tampa’s water needs, forever. Not only that, but, it would guarantee the health of the lower Hillsborough River and preserve it’s fragile ecosystem, because we would have more fresh water flowing over the dam. And we would not have salt water intrusion coming up through the Bay and destroying what makes our river unique.”

Buckhorn pointed out that Hillsborough Bay is the healthiest it’s been in fifty years. He also emphasized the need for the city to prepare for climate change, especially considering its inadequate stormwater system. Buckhorn’s speech was in the historic armory building that’s being transformed into a Jewish Community Center.

“Where we are standing today, in this building, many have stood before. Teddy Roosevelt’s Rough Riders once used this open land as a camp site, just before heading up into the Spanish American war. From Dr. Martin Luther King, Jr. to John F. Kennedy, just 4 days before his tragic death, this building has played a pivotal role, not only in Tampa’s history, but, in our nation’s history.”

In fact, Buckhorn pointed out, the armory building was threatened when Dr. King spoke there.

“A young preacher, by the name of Dr. Martin Luther King, Jr., stood here on this stage and spoke to 4,000 citizens who had gathered to hear his message of equality. Many of Tampa’s black citizens stayed away that night, fearful that if their employers saw them in the crowd, they would be fired. A bomb threat was called in that night, temporarily emptying the building.

“And in that crowd, was a young 19 year old woman named Ann Porter, who heard Dr. King remind the crowd, that we stand between the dying old and the emerging new. We must help time to remember that it is always time to do right. That 19 year old, is here today and inspired by the words of Dr. King, spent her entire of life in service to others, including leading the local branch of the Tampa NAACP. Mother Ann Porter, please stand up.” [applause]

Buckhorn shot back against critics of the city’s police department. He daydreamed out loud about watching a baseball game in downtown. And Buckhorn pointed out that the city has lost $245 million in property tax revenue because of the Great Recession. And he said that unlike some other places in the south, Tampa welcomes everyone.

“There are people that are coming to this community. This, ladies and gentlemen, is a city that is a beacon of tolerance and a community that recognizes we are so much stronger when we are together, we are so much better, we are so much more competitive. [applause] I don’t give a damn what they do in North Carolina, but, in my city, that’s not ever going to happen. We are always going to stand up for each other!

Buckhorn was elected five years ago. He has three years left in his final term. There is some speculation he may leave early either to run for governor in 2018 or take a White House job if Hillary Clinton becomes president.