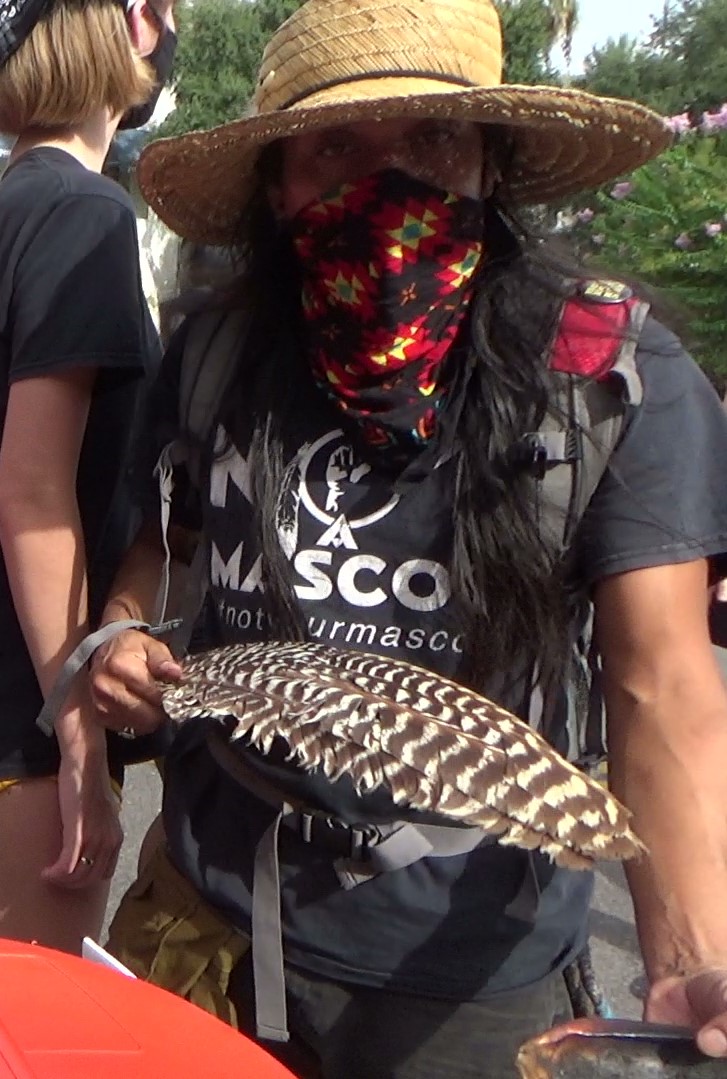 On Saturday a protester was hospitalized and arrested after being struck and carried off by a vehicle that had driven through a demonstration in Hyde Park. About 50 people had gathered to show support for activist and veteran Jae Passmore, who sustained a leg injury and a concussion a week ago during another Black Lives Matter rally where she was struck by a hit and run driver who sped through a crowd of protesters in the same neighborhood.

Passmore returned to the site where she was was hit by a truck.

After the march through the shopping district and surrounding neighborhoods, the rally ended on S. Albany Ave next to a Winn Dixie, where they held a moment of silence for black women who have been murdered by the state.

“This moment of silence is for them. Can you be uncomfortable in your silence?”

During the moment of silence, a black Volkswagen started driving toward Swann ave, and northbound into the crowd gathered on S. Albany Ave. when it came into contact with Getulio Gonzalez-Mulatierri.

As the car moved through the crowd the bumper pressed up against the legs of indigenous activist Jason Stuart Flores, who was standing in the street to block other protesters from getting hit while holding a feather in his hand and an abalone prayer shell in the other hand.

The car continued driving forward until Flores was pushed onto the hood of the vehicle, narrowly missing Passmore.

Other protesters chased after the car as it sped down Swann ave. with Flores still on the hood of the car.

Flores was arrested in front of Irish 31 by Tampa Police and the driver was told to leave. The driver’s license plate was documented, but his identity is not yet known. Passmore and the other activists reconvened the rally at Orient Road Jail with two demands:

“Give our protester immediate medical attention, and two, release him. He was a victim. TPD let the driver go, [and] arrested at the protester who was hit.”

The protesters pounded on the glass doors of the jail demanding the release of Flores.

Despite some protesters breaking the gate at the jail’s sally port, Flores was not there and was receiving medical support at Tampa General Hospital for a concussion, along with scraped and bruised knees. Tampa Dream Defenders posted bail for $3250.00. Flores was released to Sheridan Murphy, a member of Florida Indigenous Rights and Environmental Equality.

A press conference to raise awareness about recent violence against protesters will be held Tuesday at Lykes Gaslight Park at 5:30pm.

Yvonne Gougelet contributed to this story.