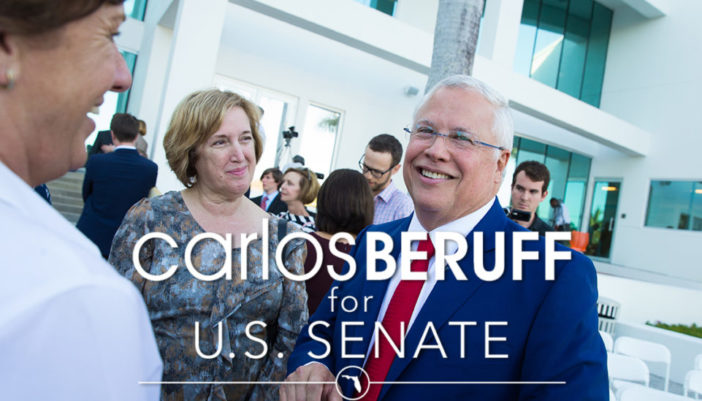 Florida U.S. Senator Marco Rubio has re-entered the race for Senate. For months he insisted he would not seek re-election to the Senate and ran an unsuccessful campaign for president instead. So far three of his opponents have dropped out of the race. But two wealthy first-time candidates remain: businessman Todd Wilcox and developer Carlos Beruff.

WMNF News asked Beruff his thoughts on Rubio entering the race and why he thinks Rubio will not complete his six-year term if he’s reelected.

“No, we saw this coming 4 weeks ago. It’s pretty evident, if you look at how they started tracking things. This is just one of those typical career politician things and how they do things and being straight forward in making an announcement. They just trickle out leaks and nonsense and the establishment is behind them. It’s pretty common. That’s what’s wrong with Washington–nobody’s straightforward.”

“Well it’s pretty simple. It’s obviously the establishment in Washington that talked Rubio into running. At the end of the day, when you make promises to people and you break them, what does that show about character? There is no character in people who break promises to the public, repeatedly. So, that’s what’s happened.

“And at the end of the day, I think the voters of Florida will see the reality of what they get. They get far into the beltway and then they get ruined because you get people who have never done anything with their lives. They’ve never created jobs, didn’t care about the economy and whose word and handshake is a foreign concept to them.”

And you have written that you’re concerned that Marco Rubio will not serve his full 6-year term if he’s elected, why is that?

“Well, because he basically would not commit to that, when he was questioned about that particular fact, just yesterday. At the end of the day, he certainly hasn’t served as a senator for the last 6 years. That’s pretty evident by his record. Now, he won’t say that he will serve 6 years. It’s just another way for him to get another shot at running for the United States presidency.

“And I think people are sort of tired of people who are just constantly looking for their next job, going to Washington. They want people, who are there, to be citizens who are representing citizens. It’s very simple. People are tired of career politicians who are feathering their own nest.”

After he announced today that he was going to run again, Marco Rubio tweeted out that the control of the senate may come down to Florida. The future of the Supreme Court is at stake and so is the future of the Iran Nuclear Deal. Apparently he thinks that these are things that he could help with rather than the other candidates in the race. What’s your response to those tweets?

“Just fully, at the end of the day, he thinks that he’s the only person that has a brain and is the only person who’s committed to undoing the Iran Nuclear Deal and obviously being very focused on who the next Supreme Court Justice is. Does he think that everybody in Florida is that shallow? He may think that, but, Floridians and people that vote certainly don’t think that.”

Some of your opponents are dropping out of the race because Marco Rubio is joining the race again. Will you do that?

“No. I committed to the race when they first started floating the test balloons, which is how politicians act, 4 weeks ago. At the end of the day, I have a naive belief, but, I think I’m right, that Florida voters will see career politicians for what they are: they only care about their interests and not representing them. And if you go, ‘Fool me once, shame on you. Fool me twice, shame on me.'”

“Never. First of all, when I got into the race, he was running for the President of the United States and that didn’t turn out so well for him. So, now he’s going to try to hold on to the limelight that these people get. They get to Washington and they don’t want to give it up. It’s their position, it’s money and influence and power – all of the wrong reasons to be in Washington – all of them.

“He should be in Washington for one reason and that is to be a public servant to serve the constituents that elect you to go up there and represent their best interests and the best interests of the United States of America. It’s real basic.”