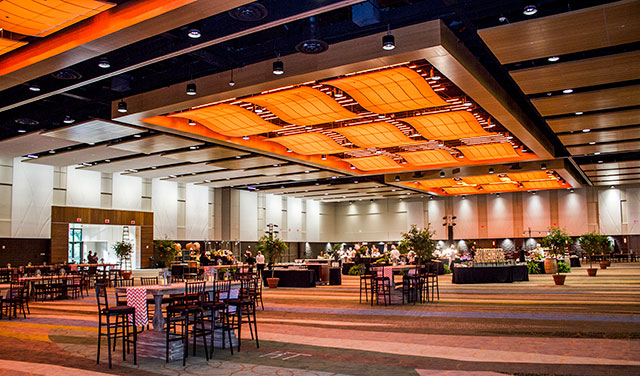 As the possibility of a nationwide rail strike looms over the holidays, and ongoing strikes by workers in multiple industries across the country continue, there is another impending strike threat closer to home in Central Florida.

Last week, over 200 food service workers at the Orange County Convention Center in Orlando, Florida voted unanimously to authorize a strike, which could occur as soon as December 1.

This vote comes amid ongoing contract negotiations between UNITE HERE Local 737, the labor union representing dishwashers, cooks, concessions workers, and other food service workers at Orange County Convention Center, and Sodexo, a global company that contracts with the convention facility.

“The results were unmistakable,” said Jeremy Haicken, President of UNITE HERE Local 737 during a Monday press conference with union leaders from across the country. “Two-hundred and thirty-five voted to authorize a strike. Zero voted against authorizing a strike.”

Voter turnout was 84% among full-time workers represented by the union, with additional input from over 130 on-call workers.

According to Local 737, which represents thousands of hospitality and tourism workers in Central Florida, the region’s tourism industry hasn’t seen a strike in over 20 years. But that could change as early as Dec. 1, the day after the union’s contract with Sodexo is set to expire.

“I support a strike because I need more money in my pocket to pay my bills when the cost of life has gone up so much,” said Jackeline Ponce, a retail and concessions worker at the Orange County Convention Center, which holds events and tradeshows that attract more than 1.5 million visitors to the region each year. It’s the third-largest convention center in the United States.

While the tourism industry, the heart of Central Florida’s economy, has picked back up after taking a hit during the COVID-19 pandemic, its workers are some of the lowest paid in the region. Sodexo’s minimum wage for their workers at the Orange County Convention Center, for instance, currently sits at $13 an hour for on-call workers, and $13.50 for full-time.

According to MIT’s living wage calculator, that’s far below what’s needed to make ends in Orange County, home to the so-called ‘Most Magical Place on Earth.’

Average rent in Orange County is up 22% from last year. And a new report from the union shows that many of those employed by Central Florida’s major tourism employers, including Sodexo and Walt Disney World, are struggling to get by.

Out of 2,415 hourly workers surveyed, 69% said they haven’t had the money to pay their rent or mortgage in the past year, while 62% said they have less than $100 in savings.

Union president Jeremy Haicken told WMNF they’re calling on Sodexo to provide an $18 minimum wage, or a $3 raise for workers this year — whichever is higher, since some Sodexo employees currently make more, while others make less.

They’ve been in negotiations for a new contract with Sodexo since August, and Haicken said the company has not only refused to entertain the union’s economics proposal, but has failed to come up with their own proposal on wages, retirement benefits, or health insurance. 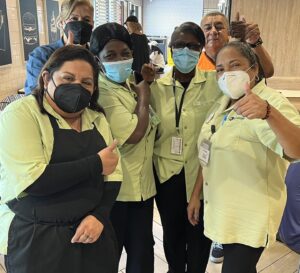 “Frontline workers like these in convention centers were hit really hard by the pandemic, and too often have had to bear the brunt of the many cancellations of events that happened,” Haicken said on Monday. “Our members’ families depend on these jobs, and it is essential that Sodexo does better so families in Central Florida don’t have to go without basic necessities.”

Yet, while their essential workers grapple with high inflation and rising rents, the same financial hardship isn’t reflected in Sodexo’s earnings. Sodexo, a global food services and facilities management company based in France, reported a 21% growth in revenue for the 2022 fiscal year — reporting about $21 billion euros in revenue, total. While that’s a bit below where they were before COVID-19, their fourth-quarter earnings this year returned to pre-pandemic levels.

When reached for comment about the Orange County workers’ strike authorization vote, a spokesperson for Sodexo said the vote “is an expected part of the CBA [collective bargaining agreement] negotiations preparation process for Unite Here.”

“Accordingly, we continue to engage in good faith during ongoing CBA negotiations, in a sincere attempt to reach a fair and competitive set of long-term agreements in a timely manner,” the spokesperson added. “Bargaining sessions are scheduled in the weeks ahead, and we look forward to continuing to offer attractive wages and conditions, while ensuring labor competitivity for our clients and consumers.”

But, according to the union, those bargaining sessions with Sodexo aren’t scheduled until Dec. 13 and 14 — two weeks after workers could call for a strike.

“We hope it won’t need to come to a strike,” said Haicken, during Monday’s press conference. “We will continue to bargain with Sodexo and we hope that we can turn the tides towards reasonable and substantial wage increases, winning a retirement with dignity, and to fix other indignities. Unbelievable things, like how on-call workers have to pay for their own uniforms just to go to work.”

Sodexo did not respond to WMNF’s inquiry about this claim regarding uniforms, nor did they answer questions about what Sodexo has offered their workers during contract talks with Local 737. In addition to wage increases, the union’s proposal also includes a better pension plan for workers and better scheduling.

And food service workers in Orange County aren’t alone in their fight. UNITE HERE announced that union members at the Las Vegas Convention Center, represented by the Culinary Workers Union Local 226, will also soon be voting on whether to strike, while UNITE HERE locals representing workers at convention centers in Sacramento, Detroit, and New Orleans warned of looming labor disputes over pay and working conditions. All three are awaiting bargaining.

“Our members are ready for a change,” said Marlene Patrick-Cooper, president of Unite Here Local 23, which represents Sodexo workers at the Morial Convention Center in New Orleans. “And we know our members are inspired by their union siblings in Orlando and Las Vegas with the strike votes that’s happening.”