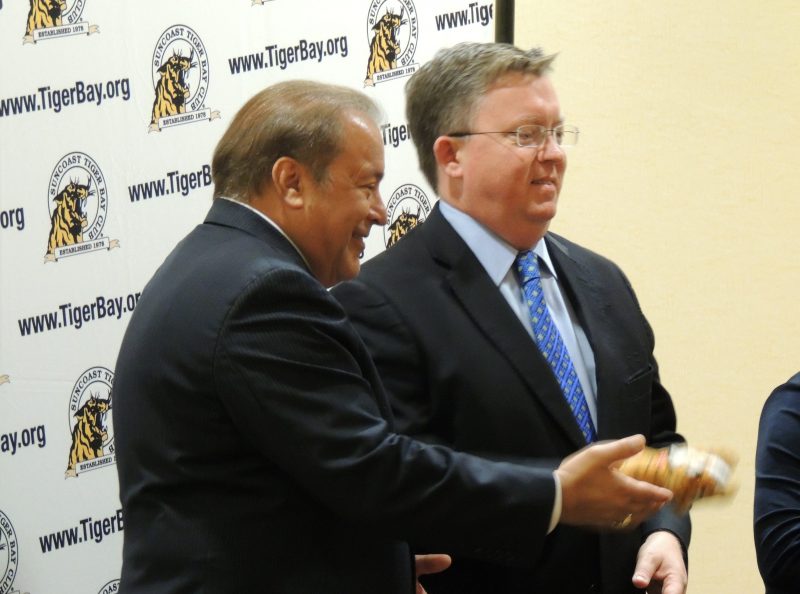 Justice and Mikurak agreed on one issue – that the county should use bed tax money to help the Tampa Bay Rays build a new stadium if it’s a good plan that helps the community.

They differed on a range of issues including who is to blame for the major sewage and stormwater dumps during heavy rains.

“My opponent says I don’t like talking about it, that’s just not true. We talk about it all the time. What I don’t like is when he misleads about it and blames Pinellas County for the individual issues of some of our municipalities.

“We talk about it all the time and in Pinellas County we’ve been doing something about it over time. We’ve doubled our budget for our pipe realign and our sewer program. What we’ve done since the crisis, as you’ve seen is that I’ve called for a county-wide sewer task force and believe it or not, it is the most popular task force to get a membership on. People have been calling me, every day, trying to get on this board.

“I will tell you, last year, when the City of St. Pete had issues with Clam Bayou, if they had called any of the other providers – there are 17 different sewer service providers in Pinellas County – if they had called, we could have helped. We could have alleviated some of that. We had pump trunks sitting by, ready to aid. They didn’t know to call each other.

“The first goal of this task force will to be to aid those communications. The second will be to put the technical experts in the same room and to see ‘Is there a feasible way that we can better connect our resources? Can we share capacity?’ because we all know there’s times in Palm Harbor when it’s flooding and dry in St. Pete and vice versa. We’ve gotta have better collaboration on that. This is something that has developed over decades, not just over the last 4 years.”

“I would agree with Charlie. It has been developing over decades. This is an issue that is not brand new. Calling and talking to or asking and waiting for somebody to call you is not the right approach. That’s where we go back to what’s reactive vs. proactive. We needed to be proactive.

“We’ve actually had sewer taxes or fees and stormwater taxes that have been put aside. We’ve even had what’s called Pennies for Pinellas, that’s been gathering funds and using those funds. Whether or not it was specifically outlined for that or not, we can discuss and question. But, it is coming up again and it should be considered to be outlined for those things.

“We’ve known about this and anywhere, in any business and any other cities, as well, you need to focus in on maintaining your systems on a regular basis and maybe some of this would not have happened. That’s part of where the problem is.

“We actually had — what was it over a year and a half ago, when the water mains, I believe, or some of the spouts on Gulf Boulevard, from the reclaimed water, started to burst? And what was really the issue is that they weren’t maintained.

“I mean, we should have known, at least, back that far, to understand that we have an issue.

Other issues they disagree on are a transit tax, who is responsible for a multi-million dollar lawsuit against the county, solutions for affordable housing and the issue of term limits for the County Commission. Justice thinks there should not be limits; his opponent says there should – but not for constitutional officers, which he referred to as “real jobs.” That, and Mikurak’s use of the word “career politician” led to an audience question about whether he thinks one of his supporters, Republican State Senator Jack Latvala, is a career politician.

“Great question. You know what? Jack Latvala does have a business as well. I think he got– if you’re going to listen to what I say or hear what I’m trying to say, you’ll– let me preface and make sure that I give you the right explanation of what that meant. As a businessman, I learned to sign the front of a check, not the back of the check, OK? I had to learn very quickly on how businesses have to run and operate. The only way you do that is that you have to be in the front end and leading. You have to understand employment issues. You have to understand needs for growth and management. You also have to make sure the funds are there and are developed in your sales and marketing organization.

“So, yeah, he has been a businessman, as well. Is that what you want to hear me say? I’m not sure if I answered the question.”

“You said you thought he was a career politician.”

“I said he’s a businessman and he’s a career politician. He’s both.”

“If you look at the mailers and you look at the ads and the flyers that my opponent puts out, ‘career politician’ is not said in a loving, respectful way. So, let’s be clear about that.

“I had another career as well. I worked for the University of South Florida St. Pete, for over a decade. I valued that career. I valued that service. We considered that a real job, as well, along with the 600 people that work on that campus.

“I value the people who create the jobs and have the businesses and take their– and stake their claim that way. I absolutely respect that, with all my heart. But, I also respect the people who put in a days work and sign the back of the check, like the hundreds of employees I work with, at USF, and the teachers and the other people who do their service to our community, every single day.”

Here’s video of the forum, in three parts: