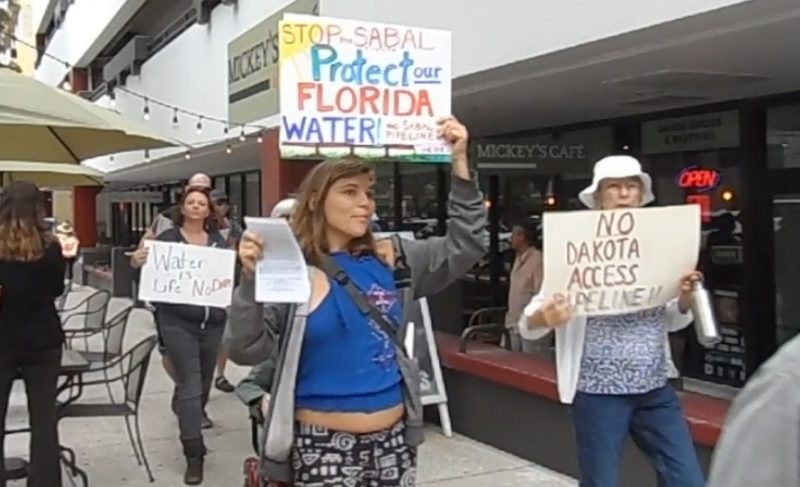 An environmental activist is predicting there will be a “large scale civil disobedience to stop” construction of a natural gas pipeline this weekend in north Florida; hundreds are expected to gather beginning tomorrow at the Suwannee River State Park near Live Oak to protest the Sabal Trail pipeline.

“So, when we’re talking about drinking water and water quality and the mantra of Water Is Life, that’s become kind of a global outcry, well this is a hot-spot for it.

“It’s a critical moment in fighting this pipeline and also a really important place to draw a line in the sand.”

“The people that know the geology of North Florida, although we see what’s above ground, the water and the springs, we know, especially, you know if you’ve see the videos of people at cave dive that what creates the beauty in this area of this ecosystems is the connection between the water above ground and the water underground. There’s a massive system of caves with limestone karst formations that make Florida what it is.

“Even though the company’s saying you’re not gonna see the drill because we’re gonna go under the Suwannee river. Well, you know they’re gonna be piercing into the aquifer, they’re gonna be damaging the sensitive limestone karst that, up here, we know when you mess with the limestone, you see sinkholes and it’s not an unusual occurrence for a sinkhole to open up or a wetland or a pond to disappear down a sinkhole. We saw it with the massive phosphate mine that unexpectedly just got sucked into a hole in the ground.

“We don’t think people should be punching holes into the ground to put pipelines in especially when they’re transporting hazardous materials.”

And those hazardous materials you’re talking about is natural gas that’s coming from Alabama, through Georgia and into Florida. The Suwanee river isn’t the only river crossing. What are the other rivers that the pipeline is crossing and what’s the construction like there?

“Well, we watched for two months as they drilled under the Santa Fe River and there were protests throughout that whole time period. We were blockading trucks, we were monitoring the construction and we were documenting company violations. That’s the river crossing I was most involved with, but, we were also watching above the Florida border in Georgia: the Withlacoochee river in Georgia–there’s another one in Florida, but–the Withalacoochee in Georgia, that feeds the Suwannee, was also drilled under and organizations documented the pipeline drilling having what they called a ‘frackout,’ where they actually unintentionally broke through the limestone karst and ended up spilling the drilling mud into the actual river, which is in itself is a problem for the river. It increases the turbidity, it can kill fish by clogging up their gills with massive quantities of– it’s a clay solution that they need to get the drill under the river.

“So, we’ve already seen violations like that. We found it. They didn’t tell anybody about it until we exposed it and talked about this thing they said would never happen. Now it’s happening already, before the pipeline’s even operational, it’s already causing damage.”

And that’s the Withalacoochee in Georgia. You mentioned the Withlacoochee river, here in Florida?

“Two weeks ago, I believe, they started drilling a pilot hole under the Withlacoochee, here in Florida, north of the Tampa area. Again, it’s a river a lot of people use for canoeing, kayaking, fishing, recreation and it’s like a jewel of the nature coast. We’ve been monitoring that. I think you’re likely to see people just as enraged about the Withlacoochee river drilling, here in Florida, as they are about the Suwannee river. We’ll see what happens this weekend, but, our hope is that this big action that’s being planned will inspire more people to get involved and enable us to spread out along the pipeline even further.”

What are the details of this weekend. I’ve heard it called the war on the pipeline. How can people find out more information and where will everything be?

“Well. We’re gonna be meeting at the Suwannee River State Park at 11:00 a.m. on Saturday. Some people will be speaking about why we’re here and issues both on the Florida and Georgia side of the pipeline that we’ve been fighting over, including environmental racism, which is one of the main contentions in southern Georgia. It’s the focus of a lawsuit against the pipeline: that they didn’t look at the economic impacts of overburdened communities, low income communities and communities of color, which is required by federal law, you know, under the Civil Rights Act.

“So, we’ll be hearing about some of those, the struggles over the last 3 years of this pipeline’s permitting process and then we’ll be marching to the drill site.

“What we’re envisioning and manifesting is a large-scale civil disobedience action to stop construction for the afternoon and send a message to the company that we’re going to start organizing. We’re not just gonna wait for elected officials to do the job for us.

“There will be people out there confronting them and challenging the construction because this is a life and death issue for people who live in the region.”

The pipeline owner, Spectra Energy, said no one was available for a phone interview, but responded to WMNF’s questions in a lengthy email. Andrea Grover, director of stakeholder outreach for Sabal Trail Transmission, LLC, wrote:

Since the start of the project development, Sabal Trail has been dedicated to mitigating impacts to Florida’s environment. Sabal Trail employed expert regional geologists and engineers who have extensively evaluated the potential impacts to wetlands associated with construction and operation of the pipeline. Sabal Trail is also well equipped to construct and operate the pipeline in karst areas. 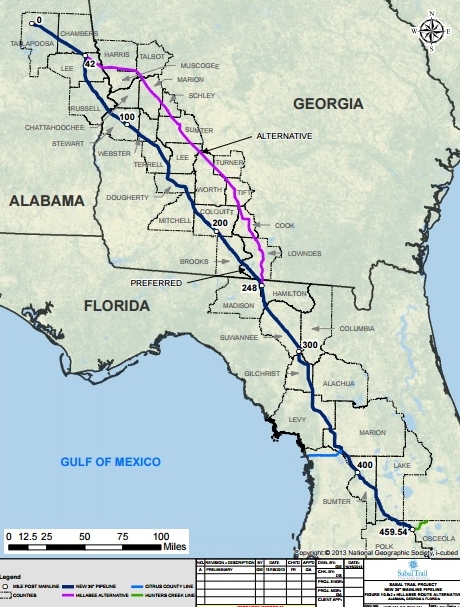 Many large infrastructure projects, such as interstate highways, railroads, and cities, are already constructed through these same karst regions and have a much greater permanent impact and footprint than a pipeline. Even in the unlikely event that a sinkhole opens beneath the pipeline, the pipeline can safely span distances exceeding 100 feet. FERC’s final environmental impact statement (FEIS) also found it unlikely that Sabal Trail would impact springs or the Floridan Aquifer in the karst regions with its construction or operations. Interstate natural gas pipelines are not new to Florida or the region and provide clean burning natural gas to electric generating facilities

The natural gas that will flow through the pipeline is in a gaseous state. Natural gas is lighter than air, which means in the highly unlikely event that it escapes from the pipeline, the gas can only travel up through the soil into the atmosphere and dissipate. It cannot travel down through soils to water supplies. Additionally, no toxins are released that would affect water quality.

The project has been developed and evaluated publicly over the past three years to ensure that environmental permitting agencies, all levels of local, state and federal government, communities and landowners’ questions were addressed and impacts along the pipeline route minimized. Over this three year period, Sabal Trail hosted more than 50 open houses and public meetings in communities along the pipeline route and underwent a well-documented, comprehensive review by the Federal Energy Regulatory Commission (FERC). The environmental impacts of this project have been determined by Federal Energy FERC not to be significant and each of the federal and state authorizations for the construction and operation of this project are conditioned to protect the environment.

Sabal Trail respects the right of individuals to peacefully protest and express their positions in public areas. It is our obligation to safely and securely construct and operate our facilities, and we can neither tolerate nor allow trespassing. We continue to implore peaceful protestors not to place themselves or our contractors in an unsafe situation.