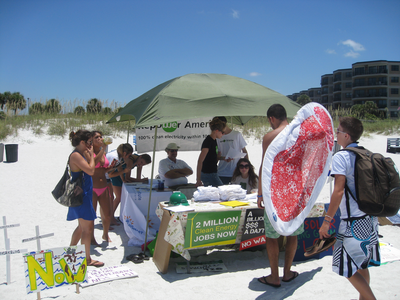 With spreading oil polluting the Gulf of Mexico, some groups say this July the US should declare its independence from dirty fossil fuels by using policy to develop clean and renewable energy.

The gulf-wide impact of the massive oil spill drew clean energy advocates to St. Pete Beach to offer their alternatives to oil, as many dismay over the overwhelming cost of the environmental disaster. Karissa Gerhke with USF’s St Pete’s Student Environmental Association and Repower America, was getting petitions signed to influence public policy.

Last week President Barack Obama announced that the Department of Energy will give $2 billion dollars to two solar energy companies, one of which will make solar panels in a former auto factory. Megan Demchar, with the Florida YES coalition of the Southern Energy Network supports the idea, though she says it’s only a start.

Repower America and the Southern Energy Network are proposing a renewable portfolio standard, which would mandate that power companies make a higher percentage of their energy production come from renewable energy sources. Jermiah Roahr is with Solar Source, a local solar panel manufacturer and distributor. He says that policy can drive the energy industry in a new direction.

And one of those people is Peter Kritezer, who was moved to see the groups getting petitions signed, and agreed with signs posted that read “100% clean electricity within 10 years.” He was shocked at how the crisis in the gulf has adversely affected the local tourism economy.

Repower America and Southern Energy Network are supporting Governor Charlie Crist’s proposal for a special session. Last week Crist asked the state legislature to meet July 20th to 23rd to consider a constitutional ban on near-shore oil drilling, which could be on the ballot in the November elections.