Home Blog News and Public Affairs Clearwater Rep. Legislator Explains Why He Criticized the “Send Her Back” Chants at the Trump Rally; Professor Points to Similarities between Trump’s Rally and Rallies During the Rise of Fascism 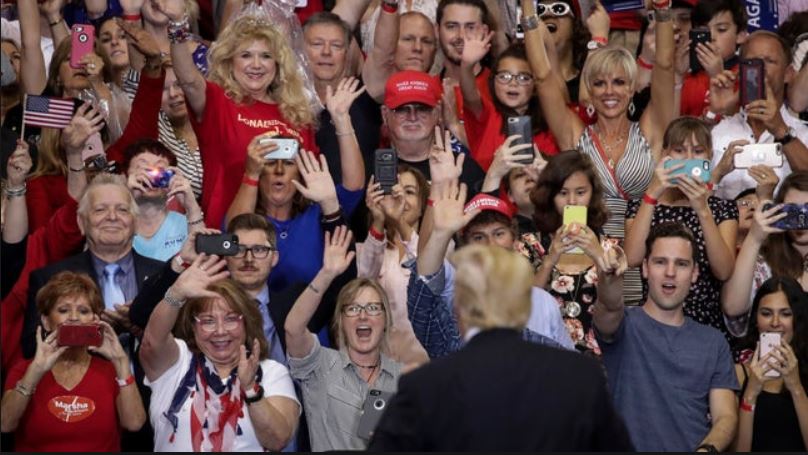 Good morning, welcome to Radioactivity. I’m Rob Lorei. Coming up we’ll speak with a local elected Republican who has been critical of the chants last week at the Trump campaign rally following President Trump’s tweets last week suggesting that four Democratic members of Congress should be removed from the country—for being critical of government policies. Later we’ll look at the end game- of what happens when we seek the removal of people from the country because they disagree with government policies.

But first one listener comment about yesterday’s program. Yesterday we covered the escalation of anti-immigrant statements by the President and his aides over the weekend. Here’s what one listener had to say.

Last week—after a series of tweets attacking four women members of Congress, all Democrats and all people of color- President Trump held a campaign event in North Carolina where this happened.

Our next guest – state Representative Chris Latvala- a Republican from  Clearwater disagreed with the “send her back” chant. And he tweeted his disagreement last Thursday morning. He joins us live. Latvala has called the chant racist.

Our next guest wrote a column this week in Truthout in which he said:

“It is both strange and disconcerting that almost none of the mainstream reporting on Trump’s rally examined its clear similarities with staged rallies in Nazi Germany and fascist Italy.”

Henry A. Giroux currently holds the McMaster University Chair for Scholarship in the Public Interest in the English and Cultural Studies Department. He’s in Hamilton, Ontario.

He is also is the Paulo Freire Distinguished Scholar in Critical Pedagog at McMaster.

His most recent books include: The Terror of the Unforeseen just published by LARB Books. Neoliberalism’s War on Higher Education (Haymarket 2014), The Violence of Organized Forgetting (City Lights 2014), Dangerous Thinking in the Age of the New Authoritarianism (Routledge, 2015), America’s Addiction to Terrorism (Monthly Review Press, 2016), America at War with Itself (City Lights, 2017), The Public in Peril (Routledge, 2018) and American Nightmare: Facing the Challenge of Fascism (City Lights, 2018). Giroux is also a member of Truthout’s Board of Directors.