Home WMNF News Environment Coalition for Immokalee Workers ramp up for the Fair Food parade and concert in St.Pete 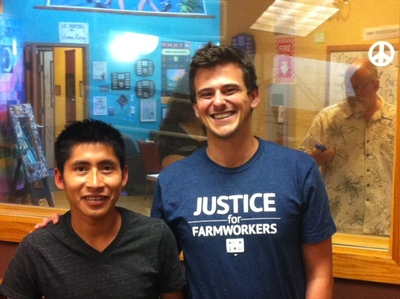 Today Leonel Perez and Joe Parker of Coalition of Immokalee Workers talk about its Fair Food parade and concert, which will take place in St.Petersburg on Saturday starting at noon. The event will celebrate the achievements of CIW’s Fair Food Program.The campaign calls for a collaboration between food buyers, distributors and Florida’s tomato farm workers to address abuse and exploitation on farms by adhering to a fair food code of conduct. Participating companies also pay an extra penny per pound of tomatos towards improving living conditions for workers. The program has successfully redistribute $16 million to thousands of tomato farm works and has enlisted 13 major food buyers into the agreement such as McDonalds, Walmart,Taco Bell and Burger King. Still, Wendy’s and Florida-based grocer Publix have long held out on signing the agreement. Tomorrow’s event will began as a parade at St.Pete’s Bartlett Park and end in a concert at Vinoy Park.

We then look at the possibility of fracking coming to Florida. One instance of acidic fracking in the state had been shut down because it was illegal. Kim Ross and Ryan Lee of ReThink Energy Florida joins us to talk about how current policies regarding fracking in Florida and how the practice could effect our health and environment. Ross will be speaking at the John F. Germany Library auditorium Saturday at 11 a.m.