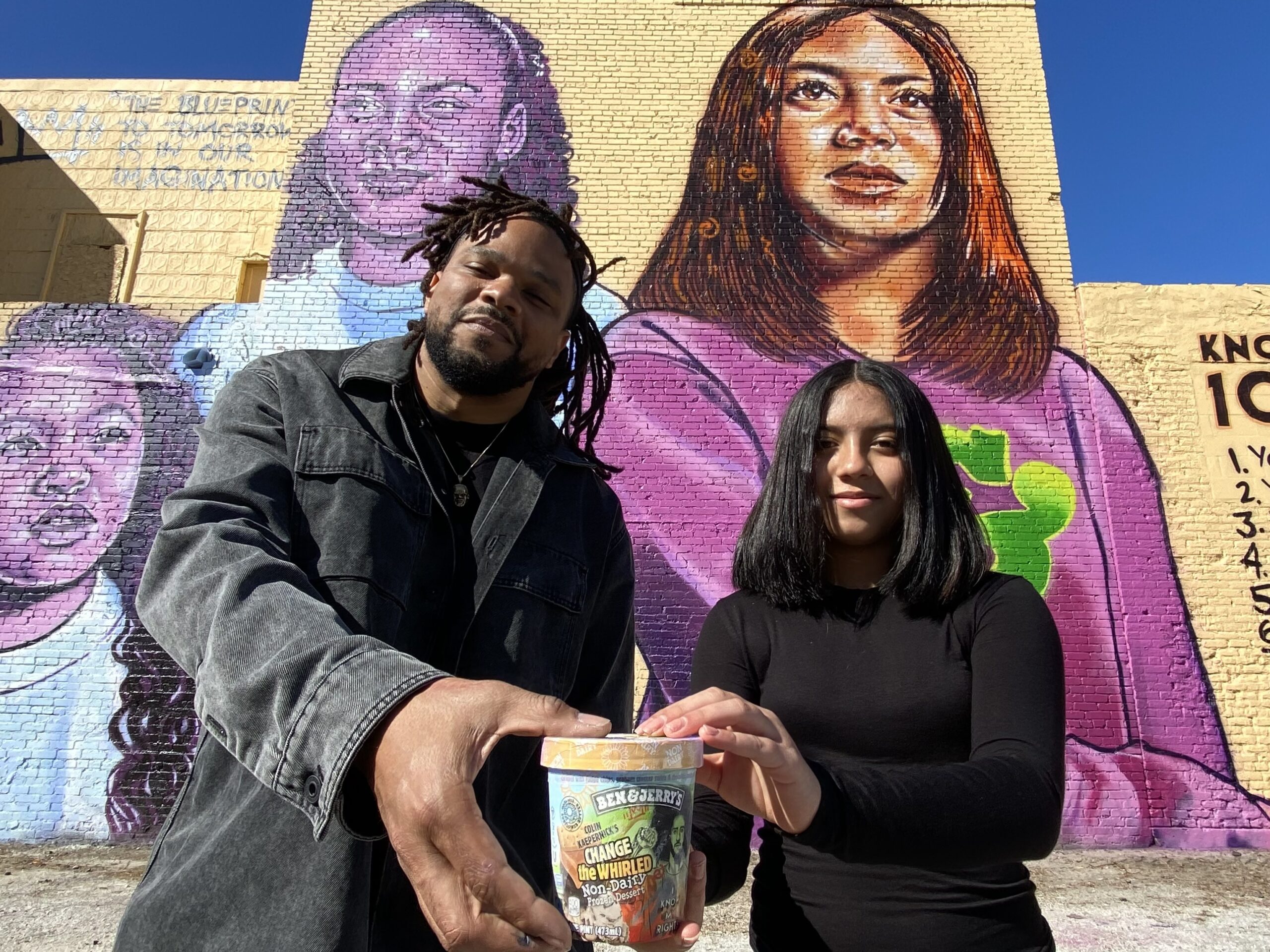 The image of controversial quarterback Colin Kaepernick now appears on a massive mural in West Tampa that supports his fight for social justice. The mural was unveiled Wednesday as Tampa gets ready to host the Super Bowl on Sunday.

Chelsey Ramirez stands barely five-feet tall. But now the 13-year-old Stewart Middle Magnet seventh grader’s likeness, all 30-feet of it, will look over the West Tampa neighborhood she calls home.

The 30-by-90-foot mural is a celebration of Kaepernick’s work to fight police brutality and racism and to empower Black and Brown people. It features the 10-point tenet of his non-profit Know Your Rights Camp.

The blueprint to our tomorrow

Created by New Orleans activist, artist and educator Brandan “BMike” Odums, the mural is called Change the Whirled. It’s the same punny name as Kaepernick’s new signature Ben and Jerry’s flavor and mimics the pint’s artwork. Odums also decorated the pint. Kaepernick is donating proceeds from the work to the non-profit.

The work features the likenesses of Chelsey and two other Tampa children along with Kaepernick’s nieces and Kaepernick himself raising a fist. But it’s a quote up top reading “The blueprint to our tomorrow is in our imagination” that carries the real message.

During the unveiling, Odums told Chelsey just that.

“Ya’ll can rethink the structures that all us old folks are fighting and trying to change,” he said. “Ya’ll have the ability to rethink it and re-see it or to see it differently. Cause ya’ll could be like ‘yo this is whack. Why ya’ll even talking about this.’ And ya’ll can just rethink the whole thing with your imagination. And that’s what this piece is about. It’s about how in you all, in the youth, is the blueprint of tomorrow. You dig?”

Odums had some local help. Tampa-based muralist Eric Hornsby, also known as Artist Esh and St. Pete artist Carlos Culbertson, who goes by Zulu Painter, also helped out. Esh lent some scaffolding supplies to the project and both men helped paint the mural.

“B Mike hit me up and then I got in touch with a local painter, Zulu Painter 1,” Esh said. “He’s out of Saint Petersburg. Very talented artist. And he also came out and painted for two days on this wall as well.”

Odums said the mural’s location is significant. It might not be the most prominent spot in the city, but it’s a spot where the message will get to the folks to whom it matters most.

“This being Tampa’s traditional Black downtown on a Black-owned building, I think here it’s gonna do a lot of good,” Esh said.

‘We all are the same’

Kaepernick was all-but ostracized from the NFL in 2016 when he began taking a knee during the National Anthem as a way to protest systemic racism and police brutality. At the time, some criticized the move as unpatriotic despite it being suggested to him by retired Green Beret Nate Boyer. Last year, the killings of George Floyd and Breonna Taylor among others sparked international protest and renewed vigor in the fight for racial equity. Awareness brought on by the summer’s activism even garnered Kaepernick an apology from NFL Commissioner Roger Goodell who said the league should’ve listened earlier.

The mural was funded by Ben & Jerry’s who will also be sponsoring a COVID-safe community drive-thru Sunday where families can grab a meal, a pint and some gift certificates to local businesses.

Chelsey, a Honduran immigrant who passes the corner of Moses White Boulevard and Albany Street where the mural stands nearly every day, said she hopes people see it come away with a message of hope and inclusion.

“It doesn’t matter what skin color you are, where you came from, what sex you are – female, male,” she said. “We all have our own rights. We all are the same.”