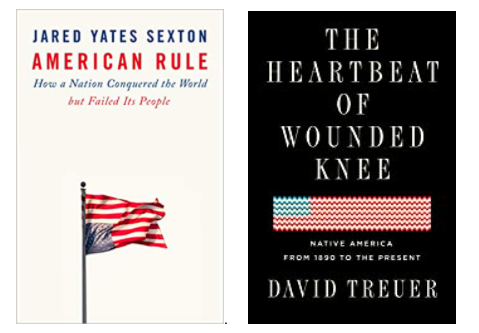 In his new book, American Rule – How A Nation Conquered The World But Failed Its People writer and political analyst Jared Yates Sexton takes us on a journey through the history of the United States, from the nation’s founding to the twenty-first century. He examines and debunks the American myths we’ve always told ourselves. In recent years, Americans have faced a deluge of horrifying developments in politics and culture: stolen elections, fascist rallies, families torn apart, and locked away. A common refrain erupts at each new atrocity: This isn’t who we are. Jared Yates Sexton upends those convenient fictions by laying bare the foundational myths at the heart of our collective American imagination. From the very origins of this nation, Americans in power have abused and subjugated others; enabling that corruption are the many myths of American exceptionalism and steadfast values, which are fed to the public and repeated across generations. Working through each era of American growth and change, Sexton weaves together the origins and perpetuation of these narratives still in the public memory, and the acts we have chosen to forget. Stirring, deeply researched, and disturbingly familiar, American Rule is a call to examine our own misconceptions of what it means and has always meant, to be an American. Here we are on the eve of the most consequential of elections, listen carefully to Jared’s conversation with Norman B. He does not shy away from displaying his concern and emotions.

The subtitle to David Treuer’s latest book, Heartbeat Of Wounded Knee, explains the American history you should know: Native America From 1890 To The Present. Sadly, as Treuer meticulously shows in over 500 pages the history of Native Americans is the history of the United States. David Treuer grew up Ojibwe on a reservation in Minnesota, he trained as an anthropologist, and researched his Native life past and present for his nonfiction and novels, he uncovered a different narrative from what he had been told. His heritage had not disappeared, despite but rather because of the intense struggles by Native peoples to preserve their language, their traditions, their families, and their very existence–the story of American Indians since the end of the nineteenth century to the present is one of unprecedented resourcefulness and reinvention. In The Heartbeat of Wounded Knee, Treuer melds history with reportage and memoir. Tracing the tribes’ distinctive cultures from the first contact, he explores how the depredations of each era spawned new modes of survival. The devastating seizures of land gave rise to increasingly sophisticated legal and political maneuvering that put the lie to the myth that Indians don’t know or care about property. The forced assimilation of their children at government-run boarding schools incubated a unifying Native identity. Conscription in the US military and the pull of urban life brought Indians into the mainstream and modern times, even as it steered the emerging shape of self-rule and spawned a new generation of resistance. Make sure you do not miss Norman B’s interview with David as he talks emotively about the past, the present, and the future of Native America.