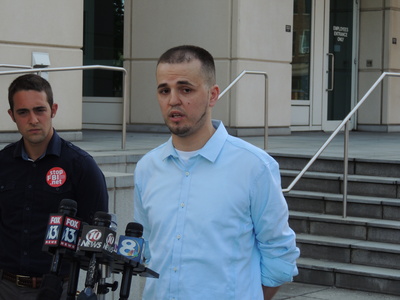 The brother of a man convicted of plotting terrorism says it was an FBI setup. Avni Osmakac lashed out at the government during a press conference Tuesday in front of the federal courthouse in Tampa. That’s where his brother Sami was found guilty last month of trying to possess a weapon of mass destruction.

“Everything my brother knows about religion is coming from them. He didn’t know [anything] about religion until he got sick. Everything he knows – the videos, the audios you hear, everything – somebody’s behind in the background telling him these things, offering him money.”

Sami Osmakac came into the FBI’s radar in 2010. That was shortly after a rough plane ride left him shaken and, according to his family and testimony during his trial, depressed and suffering from post traumatic stress disorder. His brother thinks that made him an easy target for the FBI.

“We’ve seen different changes from him. He would just go and talk to himself and multiple other things and we kept begging him to go to the doctor, but he would always reply and rush out of the house, ‘[they’re] going to kill me.’”

The Osmakac family is appealing Sami’s charges. Since being watched by the FBI, prosecutors argued during Osmakac’s trial that he planned to plant a bomb at a local bar, take hostages at the Seminole Hard Rock Casino and later detonate a suicide bomb once the heat was on. These are all plans Avni Osmakac says his brother wouldn’t have been capable of making. Jared Hamil with the Committee to Stop FBI Repression is trying to rally support for Osmakac and countless other Muslims who have been tried on terrorism-related charges.

“Like, 95% of them were basically people [who] have been convicted when they actually pose no actual danger. So, people are targeted, pushed and manipulated by the FBI to perform plots and ideas set up by the FBI.”

Another member of the Committee to Stop FBI Oppression, Jared Hoey, says the targeting of people based on their religion or country of origin is all too common. He cited the arrests of five people referred to as the Holy Land 5.

“…who were arrested for running a charity organization for Palestine and it is currently targeting Rasmeah Odeh, associate director of the Arabic-American Action Network and longtime community activist. She is currently being charged on accusations of lying on her immigration papers from 20 years ago. So, it’s clearly a political attack.”

Both Hoey and Hamil are reeling after charges against former USF professor Sami Al Arian were dropped last week. Hamil says the Al Arian case is an example of how over zealous the FBI is when investigating suspected terrorists.

“The FBI spent over 10 years with over 400,000 recordings of phone calls all because he was Palestinian and he was a civil rights leader. A jury at this very courthouse saw through the government’s lies and found him not guilty.”

And Hamil isn’t alone. Samantha Bowden is the communications director for the Council on American-Islamic Relations. She was shocked when a jury found Sami Osmakac guilty.

“The FBI radicalizes more moderate Muslims than Al Qaeda in the United States. This is a conspiracy by the government to perpetuate the war on terror and I believe due to Sami’s mental health issues, he’s another victim.”

Osmakac is expected to be sentenced in September. He faces life in prison for one charge and ten years for a lesser charge of possessing an illegal gun.