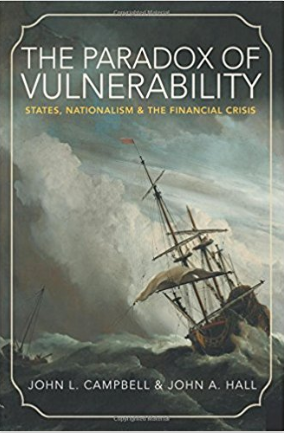 There’s a fierce debate in this country about why Donald Trump narrowly won the 2016 presidential election. What led to the Trump victory? The real estate mogul and reality TV star was able to break through in traditionally Democratic leaning states like Michigan, Wisconsin and Pennsylvania. He also won in Florida by 113,000 votes over Hillary Clinton, more than a 1% victory margin in this purple state. Our guest John Campbell is a professor of sociology at Dartmouth College and he’s written a new book called AMERICAN DISCONTENT: the Rise of Donald Trump and the Decline of the Golden Age (Oxford University Press) in which he argues that Trump’s victory was long in the making, the result of trends that have been happening in the US since the 1970’s.
Campbell argues that Trump’s rise to power was the culmination of a half-century of deep, slow-moving change in America, beginning with the decline of the Golden Age of prosperity that followed the Second World War. Those trends include globalization, increasing partisanship, a growth in support for “neo-liberalism” and a decline in upward mobility- especially for working class and middle class Americans.

John L. Campbell is Class of 1925 Professor in the Department of Sociology at Dartmouth College and Professor of Political Economy in the Department of Business and Politics at the Copenhagen Business School. He is the author of numerous books, most recently The Oxford Handbook of Comparative Institutional Analysis (2010), The National Origins of Policy Ideas (Princeton, 2014), The World of States (Bloomsbury, 2015), and The Paradox of Vulnerability (Princeton, 2017).

Campbell cites a study of the most-likely Neil Irwin and Josh Katz who describe the people most likely to vote for Donald Trump in the 2016 general election. They include white people with no college education, living in mobile homes, employed in old economy jobs, having a history of voting for segregationists, and are evangelicals. (Source: https://www.nytimes.com/2016/03/13/upshot/the-geography-of-trumpism.html)