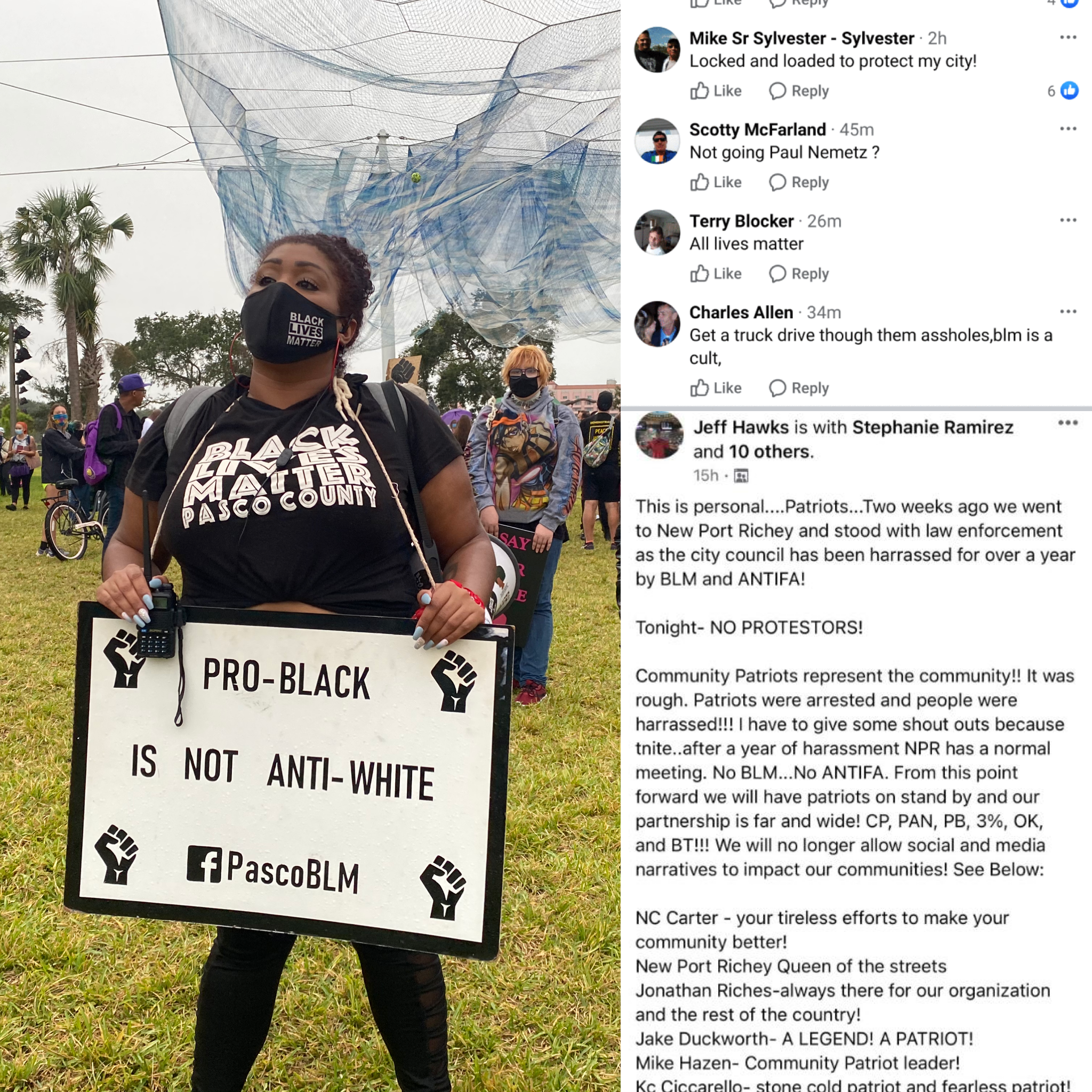 Racial strife has brought national attention to the Tampa Bay suburb of New Port Richey and now activists fear their voices are being silenced. Proposed rule changes to city meetings and a rash of death threats have some feeling the First Amendment is under fire in Pasco County.

Before the cameras and recording equipment turned on, before the city council meeting’s official start, Mayor Rob Marlowe told the audience the council was “trying to keep everyone safe tonight.”

About 40 people filled the chambers with more waiting outside. But there was a stark contrast between Tuesday’s meeting and many in the last few months. All but two people were     white.

Nina Boneta is a leader in Black Lives Matter Pasco.

“They say that we’re the dangerous ones. And we’re terrorizing and we’re burning and looting – which obviously we haven’t done any of it,” she said. “And we’re literally being terrorized to the point where we can’t even go and practice our first amendment right.”

Activists in New Port Richey took to the streets with much of the country last year. Millions of frustrated citizens, mostly standing in solidarity with the Black Lives Matter Movement, called for reform following police killings of Black Americans.

Police and city leadership acknowledged that the demonstrations were peaceful. Then opposition showed up. Proud Boys, Oath Keepers and most recently a group called Community Patriots began to counter-protesters. They used loud motorcycles and – like the activists – used bullhorns. But, as the Washington Post reported last month, it was the Black Lives Matter activists who were cited and arrested for noise violations.

Most of the noise violations have since been dropped.

Some activists were even arrested on felony charges days and weeks after alleged incidents occurred. Police said they combed footage to find the infractions. But police chief Kim Boart said no one is being targeted.

“I didn’t want to have an arrest that wasn’t a solid arrest. The officer wanted to go ahead and arrest. But I had them hold off. I want(ed) the videos checked. So they went to every business that would potentially have some video.”

Paying a price for free speech

Public comment is a legal requirement for all public meetings. But the governing body can determine how that happens. Most councils and bodies put that at the beginning of meetings. An agenda item at Tuesday’s meeting would’ve moved public comment from three minutes per speaker toward the beginning of meetings to two minutes at the end with a 20 minute cap. It’d also prioritize city residents and business owners.

Council members declined to vote or even speak on the ordinance, but Mayor Marlowe said it was needed.

“We’ve had the same group of outsiders that come week after week after week,” he said. “They never say anything new. They just sit down there and scream and yell and disrupt the meeting. And go out into the parking lot where the chief’s people have to try to keep them from killing each other.”

On Wednesday, Marlowe said he wants everyone on all sides to calm down and was not singling any groups out.

At a Feb. 2 meeting, Peter Altman, a member of the all-white and all-male council said there are no racial problems in the city.

“”I have to believe that we do not have the rooted problems that you have suggested,” he said.

But Boneta said people of color do. That’s why she acts.

“I have a daughter, I have a job, I have a life,” she said. “I am not going here to fight with a bunch of racist, angry, privileged people just because they have nothing better to do with their life. That is not what I’m out here for.”

Activists with Black Lives Matter Pasco continue to say they are treated differently than “Back the Blue” counter protesters and the police aren’t protecting their right to speak. One member was physically attacked at a meeting after the Community Patriots put out a call to defend the council and the death threats come almost daily.

According to court records, the man accused of the attack, Jason Duckworth, was arrested and investigated in 2012. He was accused of unlawful sexual activity with a minor. The charges were dropped.

In a Facebook post Wednesday, Community Patriots founder Jeff Hawks or Tampa bragged about keeping activists from the meeting and called Duckworth a “legend” and a “patriot.”

Duckworth was never taken to jail. He was released that night with a notice to appear and a misdemeanor citation for simple battery. The person they were accused of attacking was told there identity would be protected under Marsy’s Law.

But Bogart said that one is on the courts for not redacting.

Then there are the death threats

Mike Sylvester, Sr. said he’s “locked and loaded to protect my city” and Charles Allen said “get a truck and drive through them assholes, BLM is a cult.” Corey Riley said “let’s start bashing heads soon or send them underground with the seal team to be determined.” TikTok user garybowma63 told one activist “we will take off the red hats…and put on our camo and play the game also remember mist(most) of us are professionally trained.” He continued: “just remember we shoot back and have the scary so called assault weapons with high capacity magazines. So anytime you are ready let us know.”

Bogart said it’s not enough. He said some of the counter-protesters know to watch how they say things.

“It’s not a ‘I’m coming after you’ kind of threat,” he said. “The people who are using these words, they’re very careful to not cross that line.”

For Boneta, that’s just not enough.

“What if we pushed one of them to the floor? What if we brought a gun and told them that this is war?” She said. “What if we were online threatening their lives. There’s a problem here. It’s just frustrating. It’s really frustrating.”

Boneta said she has a meeting with City Manager Debbie Mann to discuss how Black Lives Matter Pasco can help the community.