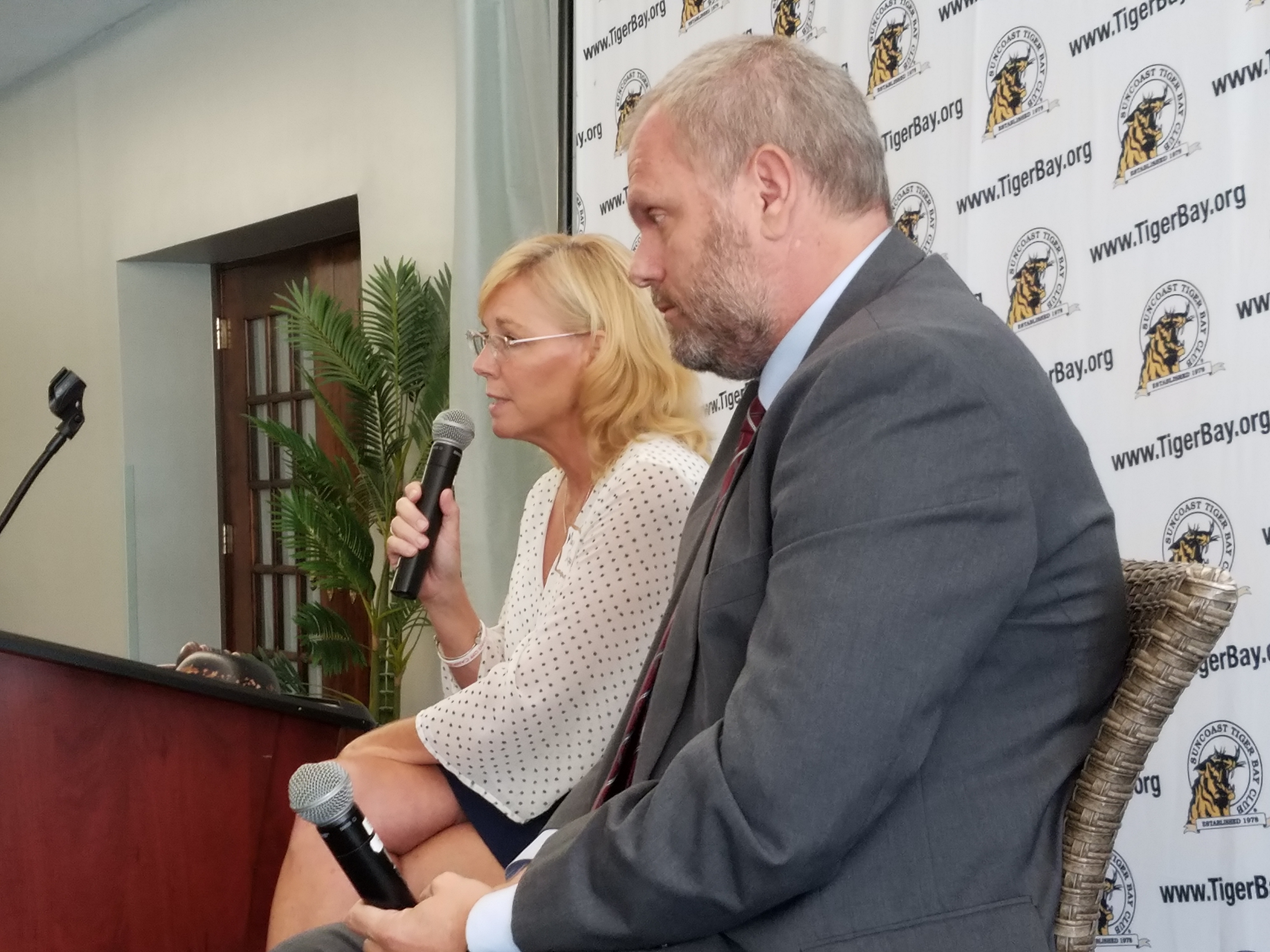 A University of Virginia graduate asked the two participants whether at demonstrations like the one over the weekend in Charlottesville, Virginia, participants’ First Amendment rights were getting trumped by the Second Amendment since police felt paralyzed into inaction because of the superior firepower of the armed white supremacists.

Here are the responses from Margie Sanfilippo, an Eckerd College professor critical of efforts to expand gun rights to college campuses, and from Jeff Young, a Sarasota attorney who defends the rights of gun owners.

“Well, and I certainly agree that the police must be extremely frightened with everything that’s going on nowadays to me I think, that that’s something else that’s been overshadowed recently, right? Not knowing who’s carrying a gun or in this case you knew, you could see it, because they were open carrying–Virginia is an open carry state–made what could have been a peaceful demonstration a volatile situation. As soon as a gun comes out, then clearly everybody is going to become that much more frightened, the tensions are going to be heightened. Its’ no surprise that people were injured and that young woman was killed. Although she was killed with a car, not with a gun. I don’t really know the answer to your question. Perhaps Jeff has a better idea. It’s just a dreadful situation.”

“So, I guess I can see a situation where people might be afraid, but, it doesn’t look like we’re in a situation in America where anybody’s afraid to do anything. So, I don’t think, no matter how many guns you bring, it’s gonna stop people on the other side from showing up and voicing their opinion or picking a fight or you know, whatever you think happened in Charlottesville that day.

“As far as law enforcement goes, that’s the same fear that they have every day. I mean, every time they do a traffic stop on a vehicle, it’s possible that the person’s armed. Every time they go to a domestic violence call at a house, somebody could be armed. They’re trained, they’re armed themselves. I’m going to trust that they are able to deal with those situations in a reasonable way, as I have yet to see any sort of mass protests break out into a major gunfight on the street.”

They were asked what could have been done to prevent the Pulse nightclub massacre in Orlando.

“The standard magazine capacity for, let’s say an AR-15 is 15 rounds or 30 rounds. You can get handguns that have magazines with the same amount of rounds that fire 45 caliber or 9-mm caliber, which are just as damaging as any round that you can put into a rifle.

“So, the only thing that I would argue is that it’s a tragic situation, it was horrific and he deserves to be punished. Whoever does any of those things deserves to be punished, but, taking away my– what you want to propose is to say that nobody can have a firearm or an assault rifle. So, what you’re saying is then now I, who had nothing to do with the Pulse shooting, is now not going to be permitted to buy a firearm that I want to buy because of what this idiot did. That’s not how we should live as a society. The good people should not have to change their behavior to comport with what the bad people do. The bad people need to change their behavior to comport with what the good people do.

“So, to handle the situation like that, you need to deal with the people, not the product.”

“I do want to say one thing and that is that it’s a myth that it takes a good guy with a gun to stop a bad guy with a gun. We know that defensive use of firearms is pretty much unheard of. Most people who commit crimes, there have been people–I won’t say most–there have been situations where there’s been a good guy with a gun, in other words, a good guy with a gun is guy with a gun who hasn’t used it badly yet, who didn’t even use it to defend. So, this idea that we’re going to somehow arm all of the good citizens so they can take out all of the bad citizens is just going to create mayhem and the police are going to come into this situation and not know, you know the good guy isn’t wearing a shirt that says “I’m the good guy. Don’t shoot me.” and you’re just gonna have, you’re gonna have all sorts of collateral damage and it’s just mayhem.”

Listen to the full forum on MidPoint: