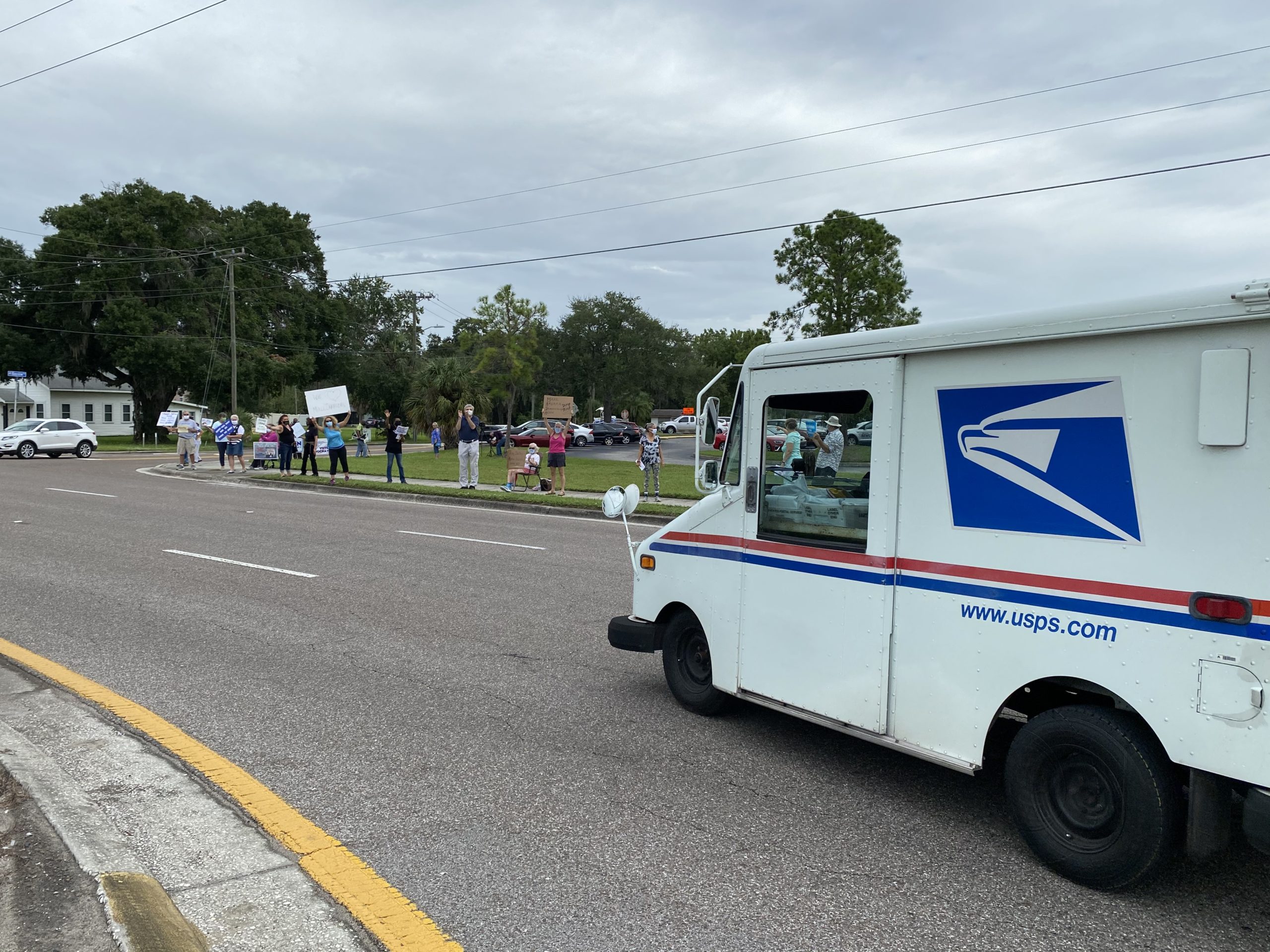 Early showers and an overcast sky cooled Tampa Road in Oldsmar as demonstrators gathered for a rally showing their support for America’s favorite federal agency.

Oldsmar resident Victoria Cuevas helped organize the rally, held just outside the city’s Post Office. The 71-year-old said it the first time in her life she’d participated in anything like it.

“I’m just an American who’s benefited by the friendship I’ve had my whole life with the post office,” she said. “The post office is a friend of mine and we should protect our friends.”

Since taking over as post master general in June, Louis DeJoy, who was appointed by President Donald Trump and donated to his political campaign, has come under fire for limiting postal service. Mail boxes have been removed along with sorting machines capable of processing more than 600 million pieces of mail a day.

DeJoy’s controversial move comes amid President Trump’s recent attacks against the agency, claiming without evidence, that it wouldn’t be able to process mail-in-ballots for November’s election. Requests for mail-in-voting, also known as absentee ballots, have soared in light of the COVID-19 pandemic. Trump has also claimed, again without evidence, that mail-in-voting would lead to voter fraud despite himself frequently voting by mail.

Cars passed, honking in solidarity as more than 40 people lined either side of the busy thoroughfare to show support for the post office. They ranged in age from nine to nearly 80. Some, like 9-year-old Jaliyah Fernandez, were demonstrating for the first time.

Jaliyah and sister Janisa, two St. Petersburg residents, were brought out by their grandmother, Yolanda Perez.

Other demonstrators, like Jeanne Arnould, have have been at it for years.

“Nineteen seventy-two, the Vietnam War,” she said. “I marcheed with the VVAW (Vietnam Veterans Against the War) against the war. I’ve always been a political activist.”

Standing on an island dividing the east and westbound traffic, LeFay, 62, a Minneapolis native, wore a black t-shirt with raised fist and the words “Black Lives Matte” beneath it. Lefay said she’s been wanting to be out protesting since the day George Floyd was murdered, but COVID-19 concerns kept her and husband Bruce Benidt home. She said seeing the post office being called into question was an attack on democracy too far.

“It’s good to be where the rubber hits the road. Literally,” she said.

“We need Republicans and independents out raising hell with their senators,” Benidt said. “Only when the senators fear for their seats will they rise up and find their spines and vote against Trump. I think the post office issue may be non-partisan enough that not just democrats will say to their Republican senators and representatives ‘Are you kidding? You cannot do this.'”