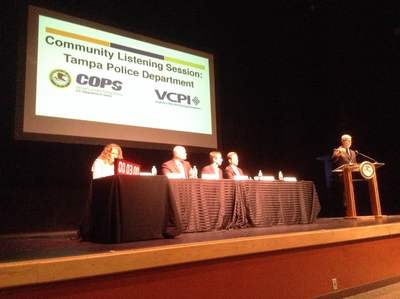 The US Department of Justice is getting community input about the Tampa Police policy of handing out bicycle citations – overwhelmingly to black residents. They held a community listening session at the Hillsborough Community College Ybor Campus Tuesday night.

“Always have been and still is,” was all James Delain can say when WMNF asked him if he believes there is racial disparity in policing in Tampa. He is one of the more than 30 attendees of the community listening session.

The US Department of Justice Office of Community Oriented Policing Services (COPS) came down to Tampa to hear from the community about the Tampa Police Department’s controversial bike citation program.

This was in response to the Tampa Bay Times investigative report published in April. The data-driven article showed that 79% of citations were issued to African Americans.

After the article landed TPD in hot water, Mayor Bob Buckhorn and former Police Chief Jane Castor invited the DOJ to investigate on the matter.

Forum participants had more negative than positive things to say:

“My son died in the police custody.”

“All over the country black people are at their tipping point because we’re tired of being sick and tired.”

Some emphasized that the public cannot trust the police if they cannot police themselves. Other attendees asked that the biking citation policy be suspended and even questioned its constitutionality.

While most of the participants believe that the biking citations are indicators of racial profiling, there were some who argued that this was not an issue of race, but rather an issue of “people who can’t follow laws”. Unfortunately, they say, that it just so happened that most of these bikers who cannot follow laws are African Americans.

“A full scale investigation needs to be launched into the practices of the politicians, the administrators, and the power brokers in the Tampa area.”

COPS assistant director for research and development, Dr. Matthew C. Scheider, said that they will analyze all the gathered data and release their findings before the year ends.

Those who were not comfortable speaking in public were urged to either write on the comment cards or to individually speak with the panelists after the session. According to Mary Brandenburg, COPS Press Secretary – External Affairs Division that they want to get as much feedback from the community as possible.

“We also have sign language interpreters here tonight as well as Spanish translator because it is important for us to hear from all facets of the community that are impacted by the issues that we are talking about here tonight.”

Tampa residents who were unable to attend the listening session can to go to vcpionline.org to submit an anonymous feedback.