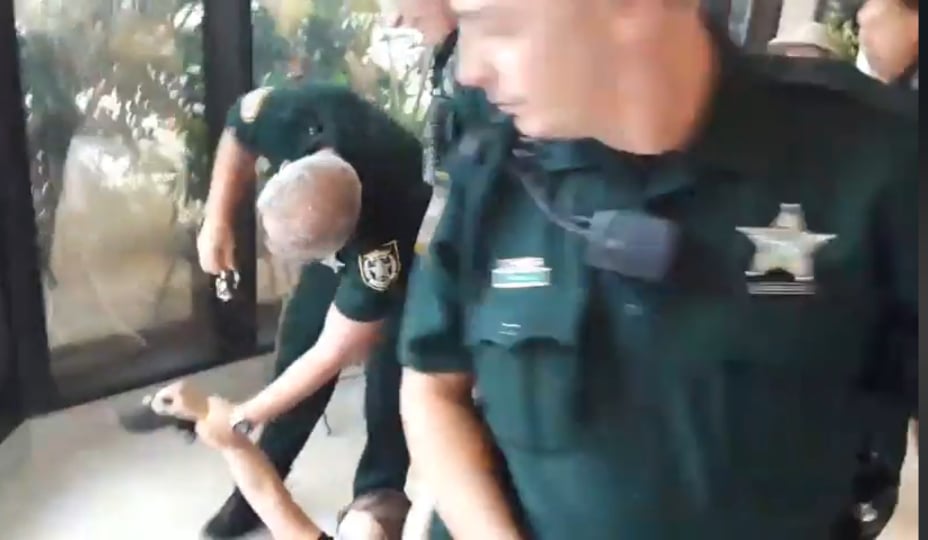 Less than 30 seconds passes between the time Kimberly Cox asked the deputy if he trespassed another woman from the building and him twisting her arm behind her back and placing her under arrest.

For most of it, he sits silently with his arms crossed and jaw clenched.

In live stream video viewed by WMNF, Cox is heard asking two questions. She enters the County Administration building’s lobby and asks two Manatee County sheriff’s deputies if they enforced a trespass on the woman. She then asks for the name and badge number.

She asks repeatedly as Deputy Neri – identified in the video by his nameplate – stares blankly. When she tells him he his legally obligated to give his name and badge number, he gets up as he tells her to go inside the County Commission meeting or step outside.

Less than 10 seconds later, she’s on the ground with multiple deputies holding her arms behind her back as she complains of pain. Cox is then led outside as a crowd of protestors there to speak against a proposed abortion ban shout “shame” at deputies.

Megan Fernandez is Cox’s lawyer. She spoke to WMNF shortly after the arrest.

“Anyone who watches the video should be disturbed by the officer’s behavior,” she said. “Not only does the officer, who appears to be brimming with anger upon being approached, physically attack and then arrest a citizen who he is supposed to serve and protect for calmly asking his name and badge number, but she is thrown to the ground. The senseless, emotional behavior on the part of law enforcement here is disappointing but hardly surprising.”

Cox and others gathered at the County Commission Tuesday morning to protest an 11th hour agenda item that would approve the sending of a letter to Attorney General Ashley Moody asking for guidance on how the County could legally ban abortion. It’s been a pet project of Commissioner James Satcher and comes on the controversial enactment of a Texas law banning most abortions. A separate group of activists dressed as the eponymous handmaids from the show Handmaid’s Tale and sat in the front row of the meeting. Commissioners ultimately voted to send the letter.

“We see no illegal behavior on the part of Kimberly at any time during this video and only see inappropriate escalation on the part of law enforcement,” Fernandez told WMNF. “But we will be in a better position to speak to possible charges once any booking information is released.”

Local activists with the Party for Socialism and Liberation began gathering at the county building and jail to demand Cox’s release Tuesday afternoon. As of 3 p.m., Cox hadn’t been booked and little information was available. The Manatee County Sheriff’s Officer did not respond to multiple requests for comment.

In Florida, it’s not legally required for an officer to give his name and badge number. Most law enforcement agencies encourage providing the information, but there is usually no penalty if they don’t.

Fernandez, however, pointed out that asking for a name and badge number is not a crime.

This is a developing story. Stay with WMNF News for updates.