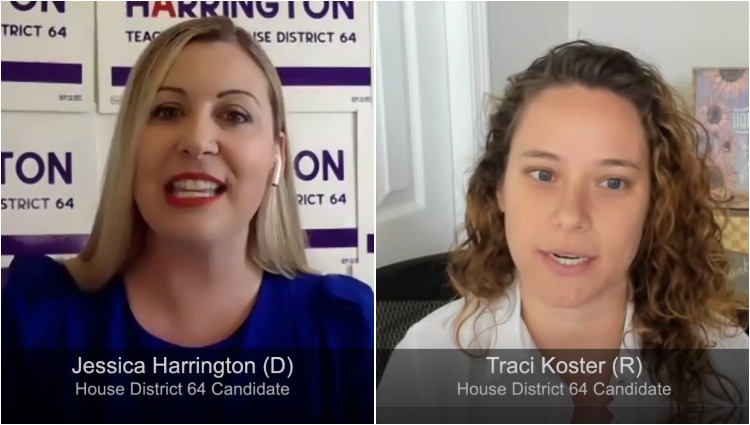 The candidates for Florida House District 64 met in a virtual candidate forum Friday. They fielded questions ranging from Medicaid expansion to budget priorities in what is one of the more unique races for the state legislature.

Democratic hopeful Jessica Harrington, a teacher, has been campaigning for the seat for two years.

She was, however, supposed to face off against would’ve-been incumbent Jaime Grant, who ran unopposed for the Republican nomination in the mostly red district.

Last month, Harrington claimed she’d won the seat because Grant didn’t file to run for office with his residential address, as law requires, and therefore the Republican Party didn’t have a nominee.

But Since Grant, who technically won the primary unopposed, withdrew from the race to become Florida’s Chief Information Officer, the Republican Party was able appoint Traci Koster as its nominee.  Koster, Tampa lawyer known for her pro bono work only has a few months to convince voters she’s the best choice.

During the Tiger Bay forum, the two shared some similar stances on things like accountability for charter schools.

Harrington added: “The problem is is that we are allowing unaccountable for-profit schools to slip into the system and their bottom line is money. It’s not our children.”

They also agreed that education and health care would be priorities in Tallahassee, but differed on what that meant.

Koster said she wouldn’t support Medicaid expansion because giving too many people access to healthcare would erode quality care.

“We need to focus on not just affordable care but quality care,” she said. “If we open up the healthcare to everybody we have a quality problem. We’re gonna have a shortage of doctors to handle the volume and it’s going to lower the quality of our healthcare.”

While Harrington said she’d support it because everyone deserves that access.

“Yes, I would expand Medicaid for 800,000 Floridians,” she said. “No person should die or go bankrupt because they can’t afford their healthcare.”

One of the starkest areas of contrast was how the two felt about Governor Ron DeSantis’s response to COVID-19.

“I think the Governor did a great job handling COVID-19,” Koster said.

And said Florida is ready to get its economy moving again.

“Now is the time to get the state back open,” she added.

“We have examples and cases of the numbers being hidden from the public to make it seems as if the numbers looked better than they did,” she said. “This is a complete mishandling of this pandemic. But we can get back on track making sure we are social distancing, we continue to wash our hands, we wear our masks. We can beat this pandemic if we work together.”

Prior to resigning his position, Jaime Grant has held the District 64 seat since it was redrawn in 2012. The district went for Barack Obama in 2008 and 2012 but chose Trump in 2016. Redistricting caused the district has begun to lean further right, creating a challenge for Democrat Harrington, who unsuccessfully ran against Grant in 2018.

But with less than three months to campaign, Koster falls behind Harrington in fundraising and recognition among her constituents.

The fate of District 64 will be decided when the two face off in the general election on Nov. 3.