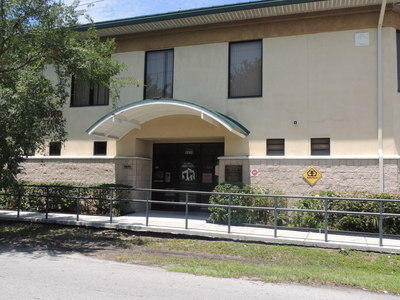 East Tampa is one of the city’s most impoverished areas. A group formed in the early 90’s is trying to change that. Leaders with the Corporation to Develop Communities of Tampa took volunteers on a tour Tuesday showcasing its accomplishments. Several former and current participants in youth programs talked about the changes it made to their lives.

“I was given hope which I really needed at that point in my life.”

“I was able to get my own place. I found a job in the casino as security at nighttime. The CDC saw a unique value in me and I’m starting on Monday to work here. Hopefully I’ll be able to pay if forward.”

The CDC is the Corporation to Develop Communities of Tampa. Rodriguez will be working in the group’s housing department. There, employees work with residents to get them ready to buy a home. Freddy Barton is the director of operations. He said the department also helps save homeowners who are struggling financially.

One of the group’s targets is home ownership. It has built more than 40 new homes in East Tampa and has bought more than 20 other homes to fix up. According to Barton, kids are more likely to graduate from high school if they grow up in a home their parents own.

“Here in East Tampa only 40% of the kids graduate from high school. That’s why we created youth mentoring and academic programs. Since 1995 when we first started our youth program we’ve seen 350 kids go off and graduate from college.”

That youth program includes college readiness courses as well as vocational training. They were just awarded a grant from Hillsborough Area Regional Transit to implement a compressed natural gas course so kids can learn how to be CNG mechanics. They also offer construction programs. Keith Lewis just started that.

“I learned a lot about working with resumes and talking to people. It’s a real good thing. I came here to better myself.”

“I’m so appreciative [of] what this program has done. Just the light, that energy that has spun in my son – I really appreciate it because I always say that we need a lot of mentors and role models for men.”

Leaders of youth programs within the East Tampa redevelopment group hope kids who complete them will come back to the community to help further bolster economic development. One of those students is Ghino Francois. He graduated from the University of South Florida with a bachelor’s degree and a master’s. He then went on to medical school in Tennessee where he graduated a month ago. Francois said he took a tour during one of his trips back home and was surprised to hear the way people talked about East Tampa.

According to the Corporation to Develop Communities of Tampa’s Barton, East Tampa spans from Florida Avenue to Orient Road and runs north from Columbus Avenue to Hillsborough Avenue. Barton said there has been a lot of improvement to the area since programs started in 1992.

“You would see the dilapidated streets. You would see the broken down houses. Picture a black and white picture where you saw torn down houses. You saw people walking looking like zombies because of the drug problems we had. You saw kids during the day on a Tuesday or Wednesday, 15 or 16 years of age, just kind of standing around [on] the corner. There were no youth engagement programs to get them into school.”

“You see beautification programs. You see kids [who] are going off to college and leaving. You see the homes that are being built. We built the first apartment complex in East Tampa – a ten unit multi-complex.”

They’ll host more tours in August and October. More information is on their website.