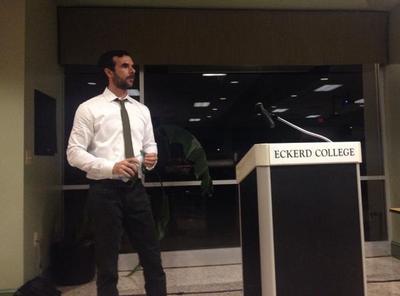 ST. PETERSBURG – On Thursday night, a forum at Eckerd College offered context about the ongoing conflict in Iraq. As part of the Presidential Events Series, history professor Adam Guerin spoke about the self-proclaimed Islamic State.

“I want to take tonight to reframe the story of the [Islamic State],” Guerin told a group of about 50 students and community members. “Not as this great evil that just appeared out of the ether. But… a militant, violent but seemingly logical response by marginalized people to what they perceive as great structural injustice.”

Guerin said the U.S.-led invasion of Iraq in 2003 laid the groundwork for ISIS. At the time, he said American administrators used Iraq as an experiment in neo-liberal economics. Guerin said the provisional government privatized everything from education to infrastructure, then cut subsidies for food, fuel and healthcare.

“The results of this vision for Iraq have been disastrous,” Guerin said. “I could sit here and list statistics all night. We have millions of refugees. You have about 50 percent unemployment over a decade. We have a completely failed, basically empty school and health care system.”

According to Guerin, that is when some Iraqis turned to radical groups for support.

Political science professor Anna Batta said planning for a caliphate in Iraq started in 2005. The leader of al-Qaeda, Ayman al-Zawahiri, was the originator of the plan.

“[Ayman al-Zawahiri] thought… the best way… would be to do it at the time that American troops were withdrawing… to fill that vaccum,” said Batta.

Batta said former members of al-Qaeda, joined former supporters of Saddam Hussein, and other radical groups to create ISIS. Batta and Guerin did not offer conclusions about the future of Iraq, instead letting students lead the discussion about the latest conflict in the Middle East.