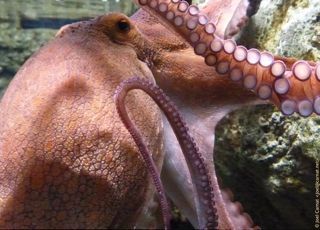 Say you’re a common octopus living in the green-blue waters of the Gulf of Mexico near Lee County, in Southwest Florida. Life is good, and it’s not just because you’re naturally capable of things that humans usually ascribe to superheroes.

For one thing, you can regrow your famous eight appendages, should one get torn off. You can change your skin to match colors, patterns and even the textures of your surroundings to avoid predators. You can squirt black ink toward those who mean to harm you and swim away at speeds up to 25 mph. You are smart and tenacious, and that, plus your lack of a skeletal system means you have the hook-up on some choice stone-crab action.

See, one of your favorite foods, Florida Stone Crab, or Menippe Mercenaria, are trapped in cages on the sea-floor, unable to run or hide. With your soft body, you can easily slip in and out of the crab traps and eat to one of your three-hearts’ content.

It’s good to be an octopus.

Right now it feels like you’re in the hurt locker.

Thanks to nature’s random way of dispersing baby octopuses, called paralarvae, who live among floating plankton for the first couple of months of life, casually riding the current right into your waters, those waters are now teeming with hungry adult octopuses who are eating up most of your trapped stone crab, as reported in an article on news-press.com, leaving behind nothing but broken crab shells.

You bust your hump to haul hundreds or thousands of stone crab traps out into 30 to 40- feet of water. Some days you fight the weather or the seas. You constantly maintain your vessel. You pay for gas, licenses, traps, tags for traps. You assemble a crew of hard-working men. You haul the heavy traps up and on excellent days in good seasons you can get up to 10 pounds of crab claws in one trap, but usually you’ll get five pounds or less. Lately, less is more common. Especially since the octopuses found your stash.

Once you pull the crabs up, the law says you may only harvest one claw unless both claws are 2 3/4 inches in length from the bottom tip of the claw where the claw bends. If not, you take the biggest claw, which must be at least the legal size, and throw the living crab back in the water so that it may regenerate a new claw.

This is no easy feat though, because if a stone crab gets a hold of you, those coveted claws can squeeze with up to 19,000-pounds of pressure.

It’s hard to be a stone crabber.

Now, if you are a stone crab things are pretty tricky. Being of low intelligence and unable to actually swim even though you are a creature of the sea, there’s a good chance you may end up in a crab trap. Though you normally eat invertebrates like oysters, urchins and clams, an opportunistic crab like you will go for an easy meal when it presents itself. And it does, for seven sweet months a year. Who are you to walk away from a freely given meal of pigs feet or mullet? Just find your way into the wooden, wire, or metal cage and dig in. Only – now you can’t get out.

Best case scenario, you’ll eat a lot of the food you scored, then be pulled out of the water to have your biggest claw snapped off. This will be about half of your total body weight, and you’re down a fighting claw, but at least you may live to grow a new claw. It will take about three years for it to be as big as the one you lost, most likely.

Because you are a crab, you don’t know this, but a study done a couple of decades ago by the South Florida Research Center showed that:

Removal or loss of the claws constitutes a significant stress to the crab. Under the protected laboratory conditions used in this study, 47 percent of the declawed crabs died from the trauma of double amputation and 28 percent from single amputation. The survivors showed reduced alertness. In the wild, where declawed crabs must compete for food, mates, and shelter, and avoid predators, the mortality rate must be even higher.

But still, at least there’s a chance you may live out your full life potential of seven to nine years. Especially if the guy who takes your claw does it properly, in a way that allows for healing and regeneration.

On the other, ahem, claw, you may have just crawled into a den of sure death. Once the octopuses know you’re there, you’re as good as dead. There is no stopping those tentacled cephalopod mollusks. They’ll slink right into that cage with you, subdue you with their venomous saliva, then crush and eat you with their bird-like beaks and toothed-tongues before they easily squeeze back out and move on to the next trap.

It’s tough to be a stone crab.

Most likely though, if you’re reading this, you’re a person who likes to eat fresh Florida stone crab claws. They’ve never been cheap, but they’ve always been a wonderful seasonal treat, a local delicacy.

Even before the Lee County octopus invasion, though, this season saw a decrease in crabs coming in for commercial sale.

An article in The Tampa Bay Times last October cited fewer crabs showing up, and fewer traps as part of the reason for this season’s slow start. Many part-time crabbers sat out this season since the 2012-2013 season was so dismal, one of the worst in the last decade. Other crabbers couldn’t participate right away this season because they were unable to get the tags required for the traps due to the federal government shut down. Less frequent storms meant the crabs didn’t come out as much. They like it when things are churned up a bit. Plus, there are always those thieving octopuses to contend with, in any season.

Because so many of us love to eat stone crab claws, the demand is high even when the yield is low. As it is with scarcity, prices tend to rise, but at least knowing what we now know, we can understand why we may have to pay a few more bucks per pound for this delectable seafood.

Although… maybe we should start eating more Octopus.