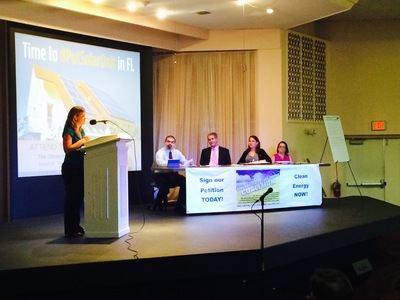 A coalition of environmental and civic groups thinks the state isn’t taking enough public input on clean energy. The Florida Public Service Commission won’t take public comment during a meeting about mandatory changes to some standards. So to get its point across, The Sunshine State Clean Energy Coalition hosted more than 100 Tampa Bay area residents at the Free Fall Theater in St. Pete for a mock hearing Wednesday night.

“This year, the Florida Public Service Commission will set new standards for energy for the next ten years under the Florida Energy Efficiency and Conservation Act.”

Just how low is shocking. According to Susan Glickman, the Florida director of the Southern Alliance for Clean Energy, Florida Power and Light’s energy efficiency goal is about a quarter of a percent of it total energy output. And it isn’t even meeting that. So, what does that mean? According to the Florida Public Service Commission website, of the more than 100,000 gigawatt hours Florida Power and Light sells, they only save 211 a year through efficiencies. Glickman thinks that’s pretty dumb considering efficiencies are the cheapest way to cut costs for consumers.

“The Florida Cabinet and Rick Scott just certified a 2200 megawatt nuclear power plant to be built accounting for 1 foot of sea level rise in Homestead, Florida. 2200 megawatts of the most expensive power possible. As my friend Peter Bradford, former nuclear regulatory commissioner said, you do not solve world hunger with caviar.”

But these people can’t take their messages to the commission. In a hearing later this month, the regulatory board and utilities will collaborate to set energy efficiency standards that are expected to end up among the worst in the nation. The meeting is open to the public, but they can’t speak. Environmentalists aren’t taking it lying down. They had a court reporter document every testimony and public comment during Wednesday night’s 2-hour public hearing that a spokesperson for the PSC said will be documented. One commenter was St. Pete resident and asthma sufferer Andy Bell.

The meeting even got “crashed” by two heads of electric utilities. DeeVon Quirolo pretended to be Duke Energy’s president and CEO, Lynn Good.

“These goals for energy efficiency are unrealistic. We have a good record already and look how the building codes have been improved, look how energy efficient appliances are available. We’ve made so much progress already, we really don’t feel the need to go any further because we’ve done such a good job.”

During public comment, dozens of people lined up to speak. The group ran out of time and had to instead start handing out comment cards. Mike Antile with the Florida Alliance for Renewable Energy was one of the first people at the mic. He and several others are calling on regulators to require more emphasis on renewable energy sources like solar.

There was also testimony from Lorraine Ross with Intech consulting. According to her, ratepayers pay on average nearly $2000 a year for electricity. Ross says the Sunshine State can do so much better.

“We get this idea, I mean, I heard the CEO of one of these companies talking about, well, Florida has clouds … well, New York and New Jersey has it and there’s intermittent snow and they are actually exceeding Florida by leaps and bounds.

The group is taking buses to Tallahassee on July 21 to rally at the Public Service Commission meeting. More information is on the Sunshine Clean Energy Coalition’s website.