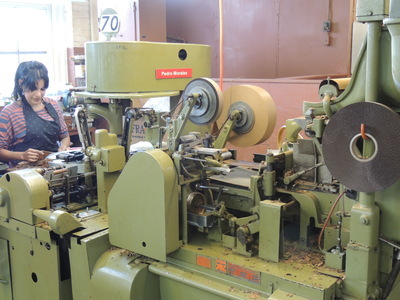 The cigar industry in Tampa could be facing extinction. If a proposed federal Food and Drug Administration regulation is approved, Tampa’s last remaining cigar factory could wind up shutting down after 119 years of business. During a tour of the historic factory in V.M. Ybor Wednesday, Lieutenant Governor Carlos Lopez-Cantera said he’s backing the J.C. Newman Company’s efforts to squash the regulation before it squashes them.

“This is a classic example of too much government and government overstepping its bounds.”

So, here’s how the regulation works: changes to rules about equipment could force the company to stop using its vintage machines used to roll cigars. It would also require every single kind of cigar sold to undergo what the 67-page proposal calls “rigorous scientific review.” But worse, says owner Eric Newman, the rule would all but kill the company’s ability to create new kinds of cigars.

“FDA regulations would require, for us to introduce a new product, 5,000 hours of testing for no reason. Testing the chemicals, the nicotine, the content … at our own expense as if we’re a Philip Morris or a cigarette company.”

The rule was written as part of an ongoing effort by the FDA to stamp out underage smoking and smoking-related deaths. The other Newman brother, Bobby, points out cigars shouldn’t be lumped into the same regulatory category as cigarettes.

There used to be 150 cigar factories in Tampa earning it the nickname “Cigar City.” Tampa natives don’t have to think long before picking out someone they knew or their parents knew who worked in one of the factories. Now there’s just the one – employing 130 people whose jobs could be in jeopardy. Ti-Ti Ploysawuon (Ploy-su-wahn) is a cigar factory veteran. She lost her job at Hav A Cigars when it closed in 2009. Ploysawuon says she’s not prepared to have to look for another job again.

“For the young people, it might be easy to look for another one, but like me, when you start getting older …. What are they going to do?”

“Cigar is to Tampa is what wine is to Napa Valley and automobiles are to Michigan. This is what Tampa stands for.”

To help, Florida Governor Rick Scott and his number 2 man, Lopez-Cantera, sent a letter to the FDA urging them to come up with a proposal that doesn’t gut the ma and pop cigar company. Lopez-Cantera calls the regulation a one size fits all piece of red tape.

“The FDA didn’t exist in 1895. Is it possible these guys and their family over 119 years have figured out how to produce a premium cigar at a lower price, but at good quality? I believe they have.”

Lopez-Cantera also plans to call U.S. Sen. Marco Rubio. More information about the Newman brother’s efforts are on their website. The WMNF News Facebook page has photos and video of the factory and the Lt. Governor’s visit there.