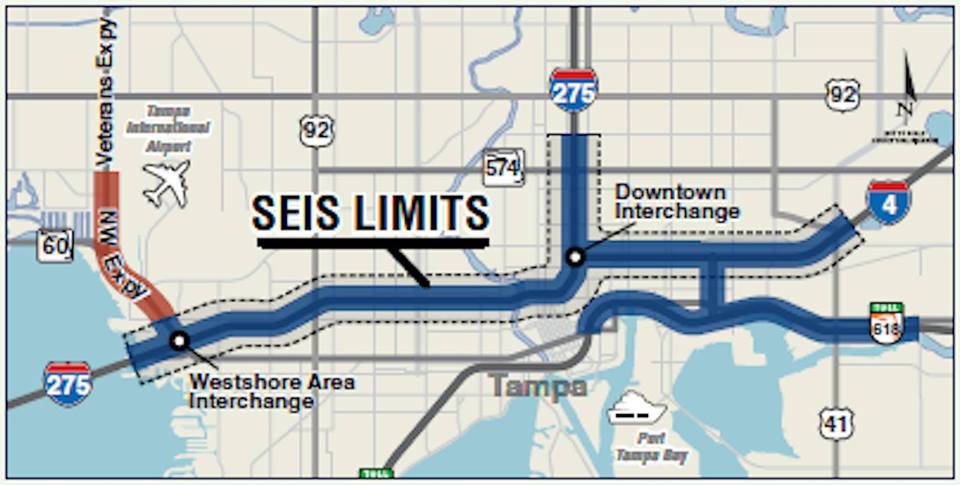 The Florida Department of Transportation is hosting two public workshops this week to share information about proposed changes to a stretch of I-275 in Tampa from the Westshore / Veterans Expressway to the I-4 / downtown interchange.

The first one is Tuesday evening.

“The meetings that will be taking place over the course of this week deal what’s called the Supplemental Environmental Impact Statement or Study (SEIS) that has been ongoing for roughly two years now. It is a study conducted by the Florida Department of Transportation of a corridor, basically that runs from the Downtown interchange to Westshore, including, of course, the connective corridor that runs you through West Tampa.

“So, that’s an updated study to get additional data to update the Tampa interstate study that was done back in the 90’s. So that’s what this is. We are getting together at the Cuban Club with FDOT representatives. The community has been invited to come review the status of that study up to this point. That meeting is at 5:30 tonight.

SK: When you say a “no build” option, that’s the alternative that would be not expanding the interstate in that case. Would that also include the Boulevard Tampa plan?

“No. It is really important that folks don’t co-mingle this with the Boulevard Tampa idea. The No Build option, basically, is the option that the community is advocating for. By the community, I mean the historic Downtown neighborhoods: Ybor, West Tampa, Tampa Heights, V.M. Ybor.

“It is an effort on our part to keep the Department of Transportation from expanding the Downtown interchange beyond its current footprint. One of the alternatives, for instance, Alternative A, would expand the footprint of that interchange by roughly double. That’s the worst. Options B, C, and D, each is incrementally less damaging, but they all create some level of damage and some expansion of the footprint.

“The No Build option is simply us saying: “We reject all four of those alternatives. We want you to leave the Downtown interchange alone, and allow the community time to get its feet on the ground on the transit alternatives that we now can pursue as part of a 21st century multi-modal scenario for the City of Tampa.”

SK: And when would the next step be? When will FDOT decide which of these options it will take?

“Certainly, tonight we should get an update on that very question. But, the way the timeline has been laid out for us, now, for well over a year, we should be expecting a final report on the SEIS study by the end of this year. Perhaps by the fall of ’19 on the outside early 2020. As I say, what we would expect at that point would be some report on what in fact the preferred alternative is. That doesn’t mean that the preferred alternative is going to be built, it simply means that that is what the study has produced.”

The FDOT “Alternatives Public Workshops” are Tuesday May 21 at the Cuban Club in Ybor City (2010 N. Avenida Republica de Cuba) from 5:30 p.m. until 7:30 focusing on the downtown Tampa interchange of I-275 and I-4 and on Thursday May 23 at the Tampa Marriott Westshore Grand Ballroom (1001 N. Westshore Blvd.), also from 5:30 p.m. until 7:30 focusing on the Westshore area interchange of I-275 and Veterans Expressway.”

Thanks to Blannie Whelan for transcription help.