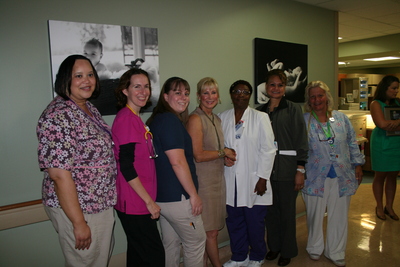 The governor’s wife, Ann Scott, doesn’t express her own opinion on Medicaid expansion.

In 2013, Governor Scott said he supported expansion of the federal Medicaid program in Florida. But so far the state has not accepted the 51 billion federal dollars

The SEIU, or the Service Employees International Union, recently estimated that 720,000 Floridians are not covered between the current Medicaid program and the Affordable Care Act.

On Tuesday afternoon, WMNF asked Scott what she thought about the state of Florida opting out of expanding Medicaid, which would have closed the gap for several hundred thousand Floridians.

“I visit hospitals all around the state, but I leave policy questions to the governor. Even if we talk about it, I support his decision. So thank you.”

WMNF also asked Pam Sanders, Vice President of Women’s and Children’s Services at Tampa General Hospital if the lack of Medicaid coverage may be affecting the hospital’s patients, but she declined to answer. She also declined interviews of other members of Tampa General’s staff.

Ann Scott now says she’s overcome some fear of public speaking and finds it easier to interact with the public on her husband’s behalf.

“I’m definitely getting out to share the Florida Turnaround story with Floridians—all the good things that Rick has done since he’s been in office.”