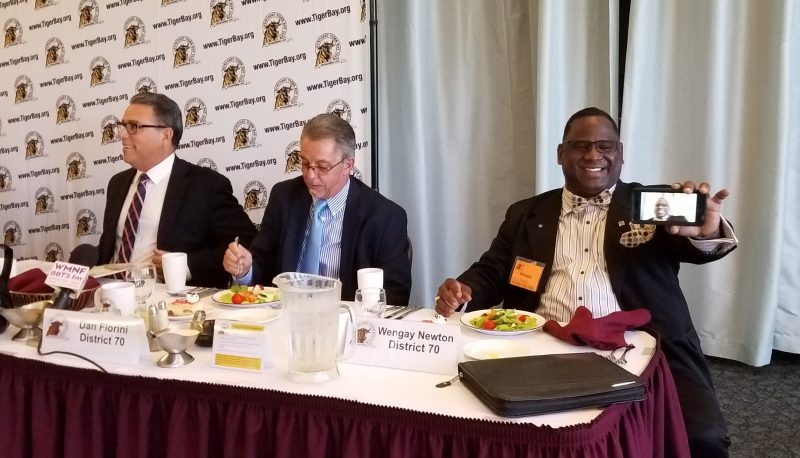 Florida’s House District 70 is gerrymandered to take in small parts of four counties, including the Sunshine Skyway Bridge; so many Democratic voters from South Pinellas, Hillsborough, Manatee and Sarasota Counties are packed into the cross-shaped district that the winner of August’s Democratic Primary should prevail in November as well.

The three Democrats fighting for the seat answered questions Friday afternoon at the Suncoast Tiger Bay Club in St. Petersburg (Three of the Democrats competing for Senate District 19 also participated).

Beforehand WMNF News asked them what they would do in Tallahassee to stop an algae bloom like the one happening on the Atlantic and Gulf coasts of south Florida. This is attorney CJ Czaia‘s response:

And Wengay “Newt” Newton, who used to be on St. Petersburg City Council:

All three Democrats agreed on many issues, including automatic restoration of rights for ex-felons, a ban on assault weapons and the dangers of a Donald Trump presidency.

The winner of August’s primary will face Republican Cori Fournier in November.

Here’s video of two of the interviews — because of time constraints, I wasn’t able to video the interview with Wengay Newton: