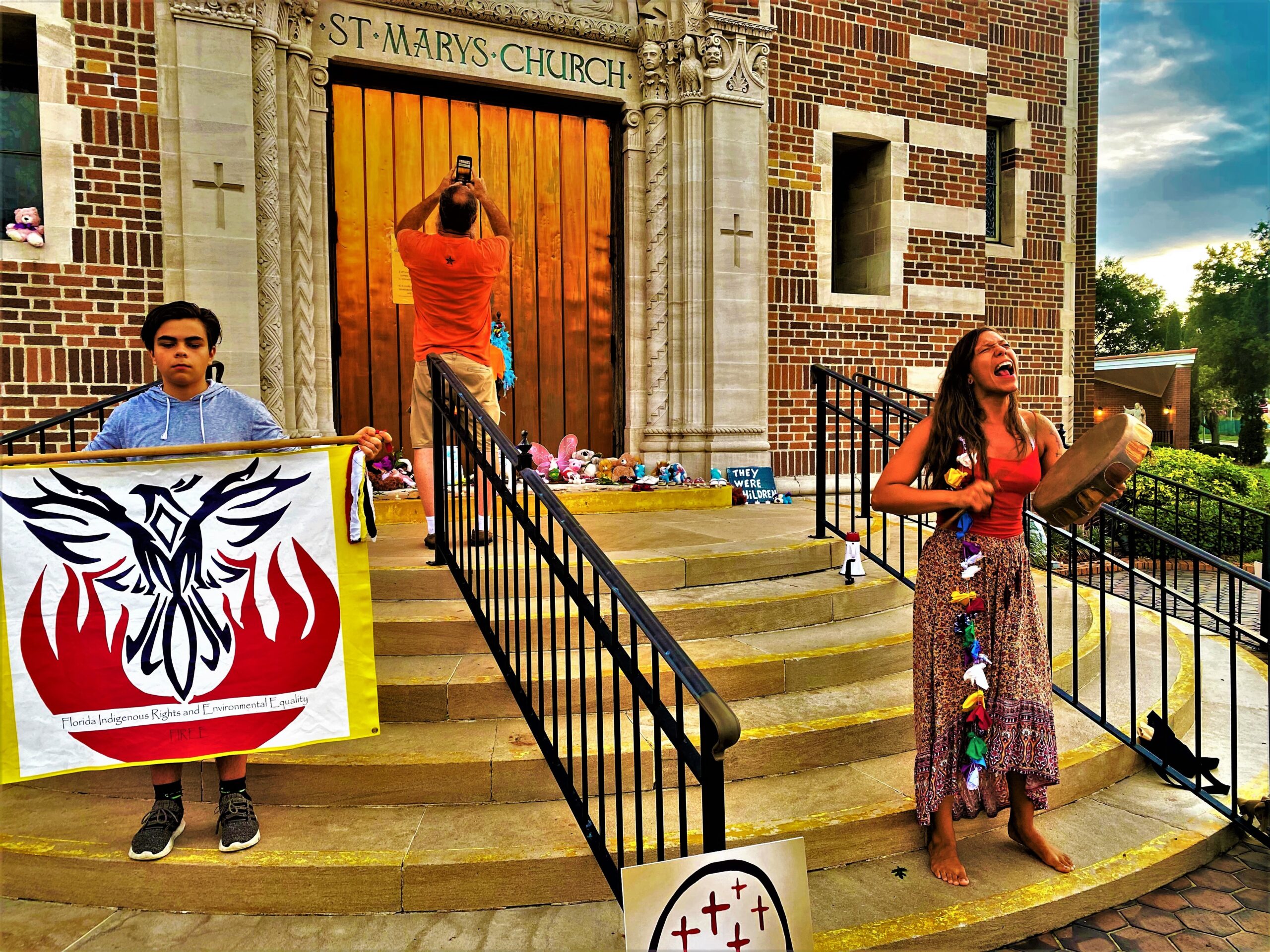 Indigenous rights activists gathered in St. Petersburg this weekend to demand action from the Catholic Church following the discovery of more than 1,000 graves filled with native children. The children were killed at schools in Canada meant to assimilate Indigenous peoples.

To the sound of a pulsing drum they marched.

They didn’t know we were seeds

Members of Florida Indigenous Rights and Environmental Equality led a group nearing 50 from a rally at Williams Park to a vigil at St. Mary Our Lady of Grace Church. The marchers wore orange to honor the children buried in the unmarked graves.

The mood was somber and acerbic.

“They thought they could bury us, but they didn’t know we were f—ing seeds,” shouted Tracy Penokie, one of the march’s organizers.

That was Tracy Penokie, one of the march’s organizers.

From the 1860s through to the 1990s, thousands of Indigenous children were forcibly removed from their homes by the Canadian government to attend residential schools. The schools were supposed to strip the children of their native culture and instill European cultural values.

Canada has apologized and acknowledged the abusive system in the past. Tales of physical and sexual assault, including mutilation were wide spread.

Marvin Wenniote Zacharie is Mohawk from the Kahnawake reservation near. He moved to Pinellas County last year. But the 79-year-old still remembers the abuse he suffered at one of Canada’s residential schools. He was forced from home to attend the school near Montreal when he was six.

“I didn’t speak English or French. I only spoke Mohawk,” Zacharie said. “And if you were caught speaking the language, they beat you. And they beat me every day.”

Canada was recently reminded of its brutal and not-so-distant past when ground penetrating radar discovered the children’s graves. In May, ground-penetrating radar found 215 unmarked graves at one school. Last month, more than 750 graves were found at another site. The following week saw 182 more graves discovered.

The schools were mandated by the government but mostly run by churches. The Presbyterian Church ran some. But most – including those with the most graves – were run by the Catholic Church.

Alicia Norris also organized the march. She said the church needs to: issue a full apology from the pope directly to Indigenous people; prosecute all living school employees for crimes against humanity, no matter their age; make a multi-billion dollar donation to establish an entirely Indigenous run language and cultural revitalization initiative; and the immediate review of all boarding school survivors who are currently incarcerated.

Norris said there are still survivors out there who need support.

“The people that are incarcerated that have attended these boarding schools are traumatized,” Norris said. “That trauma leads to alcoholism, addiction and committing crimes. It is a direct result. Everyone that is incarcerated that is indigenous. We need to look at their trauma and get them the help they need. And the support that they need from the community.”

Churches burned and statues were toppled over the weekend in Canada as outrage spread. The pope has said he will meet with Indigenous groups during a December trip to Canada.

But all across North America, or Turtle Island as it is known in many Indigenous cultures, Native Americans are engaged in a fight to hold onto their culture. In April, former Sen. Rick Santorum said Native American culture played no role in shaping the United States. In Tampa last month, native graves in a University of South Florida nature preserve were robbed when news spread the land was to be developed.

But in St. Pete Saturday, members of Florida’s Indigenous community and their allies sang along with Alexis Holland. They hoped the thousands of abused children in church-run assimilation programs would be remembered.

“Remember me,” she sang with nothing but a pulsing drum behind her. “When the Sun comes up in the morning Sky/ There I will be/ Soaring with the Eagle so high Feeling free/ Remember me. Remember me.”