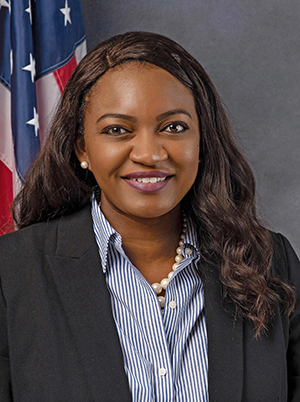 Tampa State Rep. Fentrice Driskell is making history as the first Black woman elected to lead the Florida House Democrats. She will take the reins in the 2024-2026 term.

Driskell won Tampa’s District 63 in 2018 by about 5,000 votes. And her current term expires in 2022, which means she’d need to win reelection in the swing district to become leader. But at 42, the Winter Haven-born lawyer is a rising star in state politics.

She said becoming leader-designate is an honor and shows the world is paying more attention to Black women and the role they play in politics.

“I’m just so glad to get to be a part of that narrative and be a part of that story. And to have this chance to work for a brighter future for all Floridians,” she said. “And really just leverage this platform to continue breaking down barriers and hopefully inspire more young people to want to run for office, and women of color to do it. If they see me doing it, hopefully, they’ll think that they can do it too.”

Peter Schorsch runs the news website Florida Politics. He selected Driskell as one of the 2021 Session’s winners and said she’s already a trailblazer in the Florida legislature.

“Rarely do you see someone engender the kind of respect from their colleagues at such an immediate level,” Schorsch said. “And she’s done that.”

Driskell is currently the House Democratic Caucus Policy Chair. She’s also the Democratic ranking member of the House Judiciary Committee and has a number of other committee assignments. Driskell was one of the most vocal opponents to Gov. Ron DeSantis’s HB1 “anti-protest or “anti-riot” bill (depending on how you look at it), which is now law. She also championed a suite of police reform bills and was able to pass many of those reforms through in HB 7051 with bi-partisan support.

“The fact that she was able to work with a pretty conservative Republican, Cord Byrd, to bring in some legislation for a landing speaks to the kind of leader that she will be,” he said.

Continued efforts at police and criminal justice reform will continue to be priorities, Driskell said. She also hopes to improve healthcare in the state, particularly when it comes to Medicaid expansion. But she might have her work cut out for her. Democrats only hold 42 of the 120 House seats and 16 of the 40 Senate seats. Passing any bill in the currently polarized political climate can be an uphill battle for Democrats.

Driskell said she’ll approach her leadership just as she does representing District 63.

“I don’t believe that I have all the best ideas. I don’t know that any one party has all the best ideas. But at the end of the day you always have to remember that it’s the people who sent you there to get a job done,” Driskell said. “We are here to represent our constituency and the folks in Florida who oftentimes go unheard and who don’t have a voice. We’re here to represent everybody, not just the wealthy and the politically connected. And you can expect me to center on that when I’m Democratic leader.”