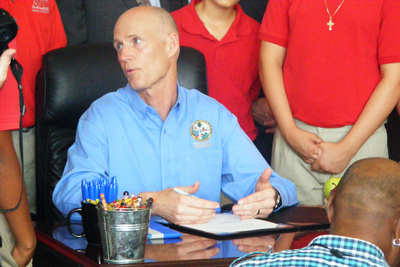 This week scientists from around Florida met with Governor Rick Scott to warn him about the dangers the state is facing because of climate change; several of those scientists told the media about what they shared with the governor during a webinar Thursday.

A Paleoclimatologist from St. Petersburg’s Eckerd College, David Hastings, says despite dire predictions, there are things Governor Scott can do to reduce the effects and severity of climate disruption.

Some of the solutions Hastings suggested are implementing energy efficiency strategies, developing renewable energy and especially closing coal-fired power plants. But he says the governor did not indicate what he is willing to do to combat climate change.

The webinar was organized by the Southern Alliance for Clean Energy and also featured an atmospheric scientist from the University of Miami.