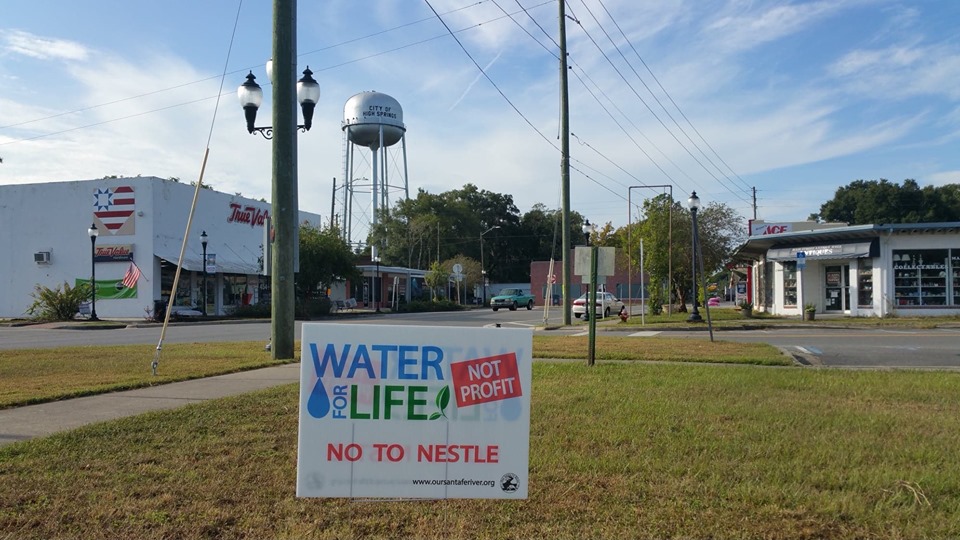 This Friday in North Florida, supporters of Florida’s springs and rivers will rally to oppose a permit renewal to allow the international company Nestlé to take more than a million gallons of water a day out of the Santa Fe River watershed, bottle it and sell to consumers.

Their “Say NO to Nestle Water Grab Protest” is Friday in High Springs (northwest of Gainesville) beginning at 5:30 p.m.

For an update, WMNF spoke with Merrillee Malwitz-Jipson, a board member with the group Our Santa Fe River.

“This water bottle situation in High Springs, Florida, does have an existing facility, existing plant. It’s a small capacity. But what Nestlé is doing right now, as we speak, is they’re building it out. They’re building it for a larger bulk transference of, not only freshwater supply, but something that we’re getting more familiar with, and that’s a wastewater stream. They intend to bulk transfer some sort of wastewater that they’re going to be creating out of this facility.

“So, yeah, we’re really concerned. Friday, we’re having a major protest in downtown High Springs. On the Alachua County side, we’ll be marching a sidewalk march with some guest speakers, the commissioner from Alachua County. Alachua County just wrote a letter to the water managers to tell them to only issue the allocation to the existing use, not the entire amount, but the existing use. Columbia County took it a step further. Columbia County said, no, at all. They wrote a resolution, a strong resolution, against extracting water at all at this facility, and wrote it directly to the Water Management District.

“So, what we’re looking for is public support, public interest. It’s your water. It’s my water. It’s the state of Florida’s water. And, they should manage our water resources. They are the water managers.”

The water managers, who you are referring to, are the Suwannee River Water Management District. So, what are they looking at now? And, when might they make a decision?

“What we’re faced with on November 1st, which is when our protest is, the Geocentric Consultants, which is out of the Tampa Bay area, they’ve been hired either by Seven Springs or by Nestlé’s, to provide science or answers to the questions the Suwannee River Water Management District has about this permit. They’ve been issued two RAIs [request for additional information]. This will be the second RAI that’s supposed to be, according to Geocentric, completed by Friday.

“So, Friday is a big day for us around here. When that second RAI gets finished, the Water Management District staff will review it. They’ll analyze it. They’ll figure out whether or not they like the answers.

“They didn’t like the answers the first time around. So, we’ll see if they like the answers the second time around. And then, they’ll either decide, ok, the permit’s complete. They got all the information they need to proceed. Proceed means one way or the other. Thumbs-up or thumbs-down. And, that process goes in front of the Water Management District board members, which right now, we’re at a deficit. Just like a lot of state water boards across the state of Florida, where we only have six board members, when we should have nine in our case.

“And so, these six members, unless we get three more between now and whenever that goes in front of the board, will decide the state of this water permit. And, with that, it could be as early as the second Tuesday of this month, because that’s when their board meetings meet, at 9 a.m. in Live Oak Florida. It could be December or could actually be January or February, which will be more likely. But we just don’t know as of yet.

“But everything hinges on Friday, and whether or not that Geocentric Consultants gets their answers together to hand into the Water Management District. And, a lot of that’ll be based on science. And, we’re prepared with science too. We’ve been talking to a lot of researchers that have all kinds of different research with aquatic systems with water levels and flows on the Santa Fe River. So, we’ll be prepared too, to study their answers, and see if they are in line, or in sync, with what we know about the Santa Fe River.”