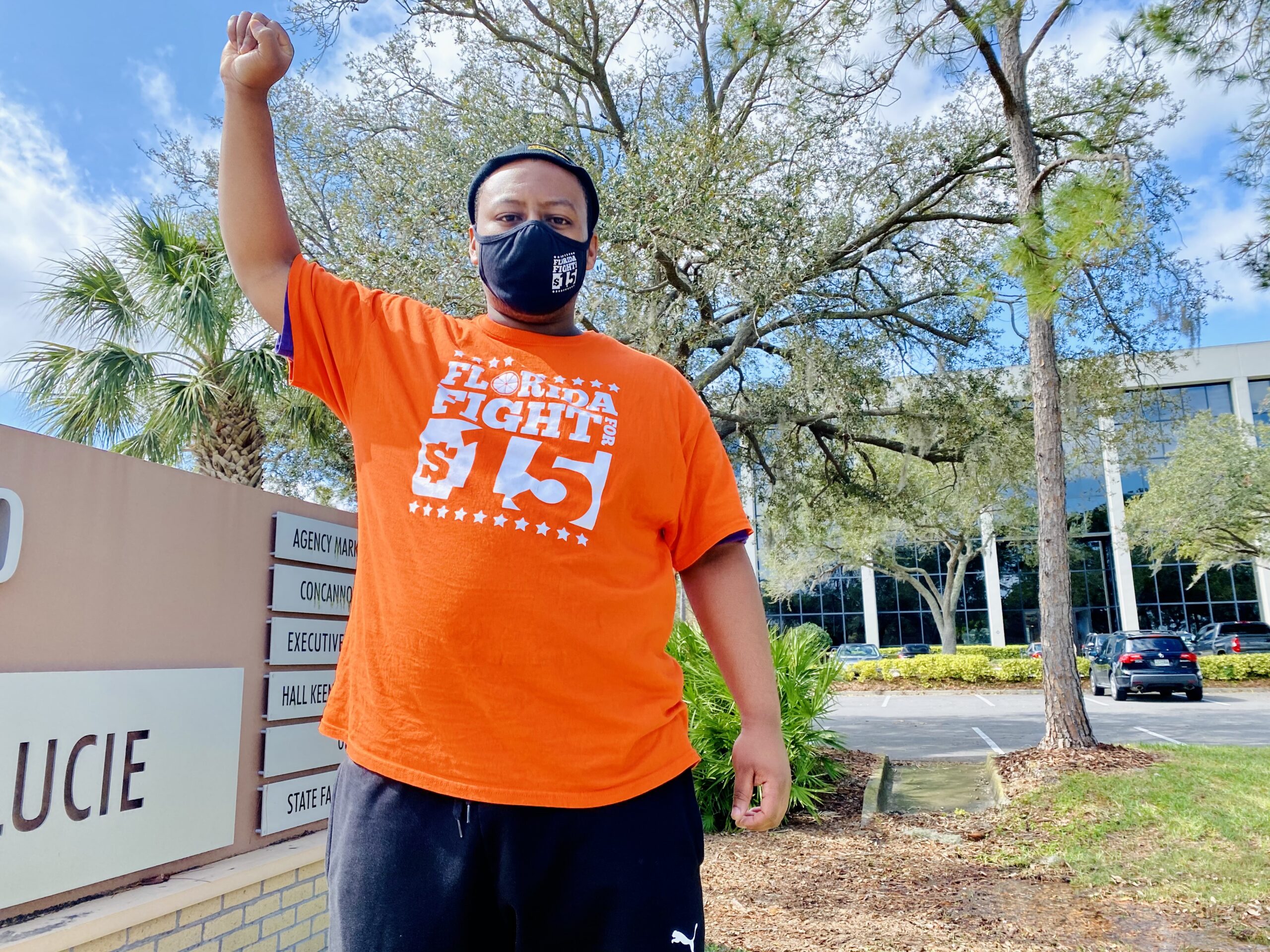 Floridians gathered outside the St. Petersburg Office of State Sen. Jeff Brandes Tuesday to protest legislation that would exempt felons and workers under 21 from getting a $15 minimum wage. Opponents of the bill say it thwarts the will of voters who overwhelmingly passed Amendment 2 in November and say everyone deserves to make a livable wage.

Alex Harris has faced an uphill battle since he was 18.

Harris was barely old enough to vote before he lost the right to. Thanks to Amendment 4 he was able to get his rights restored. At 24, he voted for the first time in November. Raising the minimum wage was one of the first things he voted for.

Harris works two jobs. Construction gets him $9-an-hour and serving at Waffle House gets him about five. For him, a raise could be life changing and give much some much needed hope. He said it’s hard to survive when the cost of living continually goes up, but wages don’t.

“My biggest thing that I strive (for) every day is generating real generational wealth,” Harris said. “That’s making sure that the next generation after me is put into a situation where they can succeed. It’s hard to do it when I can barely succeed myself. If I could make $15 an hour I’d be able to pay my bills and still have a little change in my pocket to save and really make a real difference.”

But is Brandes’s legislation, SJR 854 goes through, Harris might not see that day.

Floridians passed Amendment 2 in November. Like any amendment, it needed at least 60-percent of the vote to pass. It got it, which means without any legislative action necessary Florida’s minimum wage would increase to $10-an-hour this September, then $1 each year until it reaches $15.

Brandes said his legislation helps keep unemployment numbers down as wages rise for groups who are generally unemployed at higher rates than average. That includes workers under 21 and the recently incarcerated.

“Evidence suggests that as minimum wage rises it will get harder for them to find jobs,” Brandes said. “So what we’re doing is proposing a temporary training wage, like 30 other states use, to allow an incentive for an employer to consider those applications.”

It does not however define what qualifies as a “hard to hire” employee nor does it set any parameters for a workforce training program.

The will of the voter

Pinellas County Commissioner Rene Flowers was out Tuesday to continue the “Fight for 15.” She said she was shocked by Brandes’s bill, especially since the Republican senator has championed so many criminal justice bills in the past. She said this, however, is another example of the Republican controlled state government subverting the will of voters.

“The will of the people spoke so in my interpretation it would be that the people passed this let’s go ahead and put this into action,” she said. “But instead, individuals want to retort and bring it back and that’s just a way to control individuals.”

Flowers noted it’s the first time the Republican-controlled state government has altered a voter-driven ballot initiative. Republican legislators put restrictions on environmental amendments, medical marijuana and felon voting rights all after Floridians passed the amendments with more than 60 percent of the vote.

“It’s being thwarted and it has been for a very long period of time,” Flowers said. “I find it very interesting that they always say I’m doing the ill of the American people or I’m doing the will of the voters until persons who are also Americans oppose what they want.”

‘What’s right for you’

SJR 854 would need a House companion and to pass the House and Senate with a super majority to make it on the ballot as a constitutional amendment in 2022.

But for Floridians like Alex Harris who paid their debt to society and have spent years trying to recover, bills like SJR 854 seem like continued oppression.

“It’s like a contradiction. They tell you stand up for yourself to make that change. Speak out, allow your voice to be heard and vote. And then once you vote they say ‘oh, we don’t really agree with that decision you made. So, let us go back and tweak stuff because you may not know what’s right for you. So let us change it.’ I hate it,” Harris said. “Now here it is, you finally get a job. You’re finally elevating yourself and busting your behind. And now they’re saying we don’t even think you should make enough that a normal United States citizen makes. It’s sickening to me.”