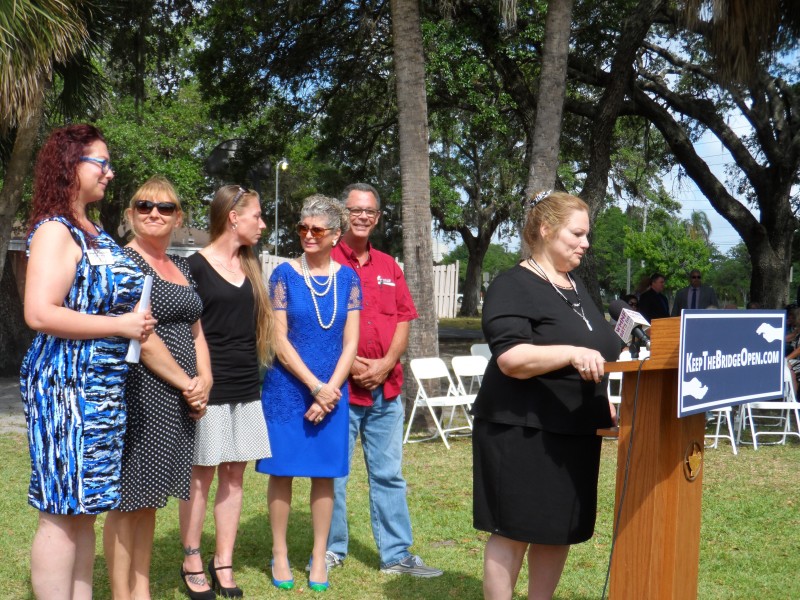 Update 12 May 2016: The Department of Corrections has extended the contract (with revised terms) for Bradenton Bridge.

An all-female inmate transitional facility in Bradenton could close soon because its contract has not been renewed by the state. The re-entry center provides substance abuse services and has a popular jobs program. Catherine Rodeheaver got a five-year prison sentence for drug sales and possession and with two years left signed up for work release program. During her time at Bradenton Bridge she took classes and then a job at the Seafood Shack in Cortez.

“I was able to get on the bus and be able to go work. I mean, it’s an amazing feeling. I was more stable in this program, working, than I’d ever been in my entire life and it was because of this program.”

Inmates like Rodeheaver at a similar program for men in Broward County are suing the state to prevent it from closing Broward Bridge. Lori Constantino-Brown is the CEO of Bridges of America, the parent company of Broward Bridge and the one in Bradenton. She says the state Department of Corrections offered the Bradenton facility an extension but only if the lawsuit is dropped.

“These programs change people’s lives. There’s not nearly enough of them with 30,000 people getting out of the prison system each year and the department can scarcely afford to give up one bed–anywhere. And it certainly can’t afford to give up any services for females in this state.”

“Yesterday, the great Governor of our state was speaking in California and interestingly enough, he talked about how reentry centers greatly impact recidivism. And so, we’re asking our Governor and our legislators and our Secretary here, to please reconsider the course that they’re taking and not only keep these programs open but, expand them so that the many, many others can take advantage of programs like these and become productive citizens of the state of Florida.”

Work-release inmate transition facilities like Bradenton Bridge allow inmates to get work experience. But it also helps the employers who hire them – and many are rallying to save Bridges as well. Angeline Pantazis, director at Bayside Pet Resorts, says there are about six Bridges inmates working there. She says the state shouldn’t abandon them in their time of need.

“Our staff has written letters about how each one of these women impacted their lives. I will not read each one, but, we can all agree that we would be lost without them. They are a part of the Bayside family and we are forever changed by their presence. Because of their outstanding performance upon completion of the program, our hope is that they stay on as Bridges employees.”

The former Bradenton Bridges inmate we heard from earlier, Catherine Rodeheaver, finished her sentence, was released two months ago and has worked her way up to a position of sous chef at the same Cortez restaurant where she worked while at Bridges.

“It means everything. I know, for me, had I not gone through this program, I’d just be another one of those statistics. I’d be headed back to Ohio and God bless my family, I love them, but, it’s unhealthy for me. I spent 18 years in addiction. Home is bad.

“And I’m able to see that through this program and the things that they have taught me. I can actually analyze these things and really think about them, whereas before I would just jump to it and go without thinking. I was able to relocate and see what is the best decision for me because I have two kids and if I can’t be healthy for myself, I can’t be healthy for them.

“What good is it gonna do me if I’m running around? Because of this, they have a mother today. Had it not been for this, they probably would not. I can say that with complete honesty.”

Rodeheaver says Bridges helped her see alternatives to the unhealthy decisions of her past.