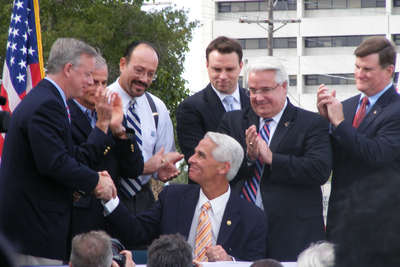 Today Governor Charlie Crist signed historic legislation for state and local rail systems. The bill passed in a Special Session of the Florida Legislature last week, which many say is the first step in also bringing high speed rail to Florida.

Protesters, politicians, and proponents of local rail systems gathered at the HART bus station in downtown Tampa. Governor Charlie Crist signed House Bill 1B today, which passed during the recent Florida Legislative Special Session. It sets up a framework for Florida’s passenger rail system, including SunRail, Tri-Rail and potential plans for high speed rail. Crist signed the bill in Tallahassee before driving through Tampa and Orlando for ceremonial signings. Tampa’s ceremony at the HART station is a site that may be a central hub for the potential high speed rail plans.

Crist is touting the move as a vehicle to bring jobs and revenue to Florida. He says the promise of job opportunities was a selling point in the House and the Senate.

Opponents of the bill contend that it will divert stimulus dollars from education and unemployment. Conservative protester Kevin Wright claims that job creation won’t balance the expense of the project.

But supporters of high speed rail claim that the cost of highway repair far exceeds that of rail maintenance. The bill gives hope to ConnectUS president Ed Turanchik, whose organization was created solely for the potential high speed rail operation. In 30 days Florida will find out if they will get the stimulus dollars, and he says that high speed rail construction will begin before any TBARTA project.

Republican Representative in the Florida House, Kevin Ambler, said that the bill failed to pass three times due to concerns from fiscal conservatives that the legislation would put an undue burden on tax payers. He said that the bill won’t divert taxes, but will compete for stimulus money that is already set aside for rail.

And if Florida receives the stimulus money, construction on high speed rail could begin in 18 months, with completion set for 2014. TBARTA will still have to get funding for local rail projects, which would come from the one cent sales tax, if it passes on the ballot next November.