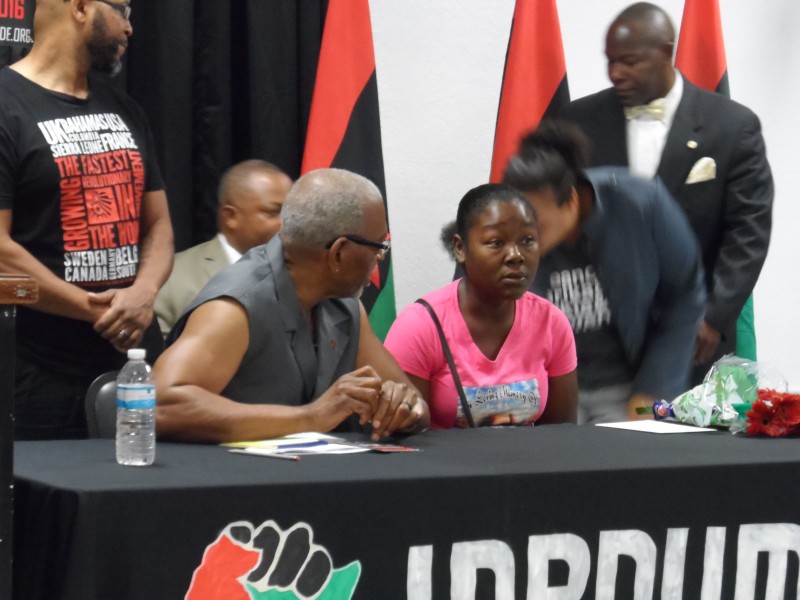 Representatives of the families of the three girls who died last month after the car they were in crashed into a pond want an outside investigation and for the Pinellas County Sheriff to resign. They plan a protest Friday and have a list of demands.

The Sheriff’s Office has said deputies were not pursuing the girls in the car, but supporters of the family say Sheriff’s dashcam video indicates a law enforcement vehicle was going more than 90 miles an hour.

The mother of one of the teenagers who died attended a press conference this morning at the Uhuru House in St. Petersburg. The parents have decided not to talk to the media because of possible litigation, but she was represented by Minister Ali Muhammad with the Nation of Islam.

“We stand with the family, to demand that Sheriff Bob Gualtieri step down. He told a lie. And whenever you lie, you discredit ethical and trust in the system we say we’re supposed to promote. If there’s no ethics in those who are supposed to protect and serve its citizens, then we are living in an uncivilized environment that the most honorable Elijah Muhammed called the ‘Hells of North America.’” 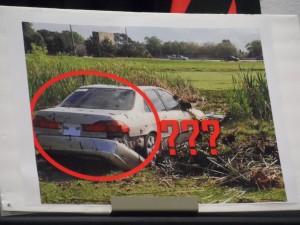 Three teenage girls died in this car when it went into a pond.

The girls died after the car they were in veered off a cemetery road and into a pond last month off Gandy Boulevard near I-275. A photo of the car was displayed at the press conference; it shows damage to the right rear bumper. The chair of the International People’s Democratic Uhuru Movement, Omali Yeshitela, suggested that indicates the police intentionally rammed the girls’ car.

“Though they claimed they did not chase  — and even though dash-cam cameras showed that they were driving at 93 miles per hour on some of the sheriff deputies cars — with the lights off. When they chased the cars, using this pit — pursuit intervention technique — what they do is drive next to the car-up to the rear of a car and tap the back bumper of the car or right under/behind the wheel to make the car spin out. And if they are traveling too fast or if they are on uneven terrain, what happens is the wheels will leave the ground and there’s no telling where the vehicle will go. Well, we know where the vehicle went in this instance. They killed those children. I think we have no problem making that statement. They killed them. They murdered them.”

But Pinellas County Sheriff Bob Gualtieri says the deputies did not use a ‘pit’ maneuver.

“Absolutely not. You know, they can suggest all they want but all they’re doing is fabricating things for self-serving purposes and none of that happened. There was no pit maneuver used, period. And that damage could be explained by any one of a number of circumstances, including from the car being pulled out of the pond after it was submerged, to the damage was on the car already, before they stole it. But, absolutely not, there was no pit maneuver done.”

Gualtieri also says in the cemetery the cars were going no more than 35 miles an hour and all the recordings and information about the crash have already been released. The Sheriff rejected another demand from the press conference group supporting the girls’ families – that the deputies involved face criminal charges.

“Of course not, that’s ridiculous. The only criminals here are those three girls who were operating a stolen car at 4:00 in the morning running from the police. So that’s a non-issue and it’s concluded that the deputies did absolutely nothing wrong.” 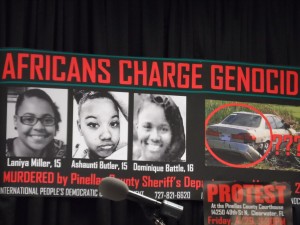 history of racist colonialism and a culture of violence in the Pinellas County Sheriff’s Office.

“This community has been surely wounded. And the atmosphere in this meeting is representative of how this community — my community, her community — is affected by this. This happens all the time – too often. And most often, black people are killed and are just dead meat.”

Two years ago the son of Andrew Joseph Jr. was struck and killed by a car after deputies had ejected him and other youths from the Florida State Fair in Hillsborough County and dropped him off outside the fair. Joseph says he’s fed up with parents losing their kids.

“In my son’s case: if there was a mangy dog running around, up in that Fair, they wouldn’t have put a dog in the police car and brought that dog to the gate and put that dog out. And that’s exactly what they did to my son. If they would have found three dogs drowning in that pond, they would have put a better effort to save those three dogs. So, we’re not here fighting a black-and-white issue, we’re fighting a humane issue. That we’re treated no better than animals. In the state of Florida, a dog’s life is worth more than a black child.”

A coalition of groups supporting the families of the three girls will protest Friday outside the Pinellas County Courthouse, 14250 North 49th Street in Clearwater beginning at 3:30 p.m.

Watch the video of the press conference (in three parts) …