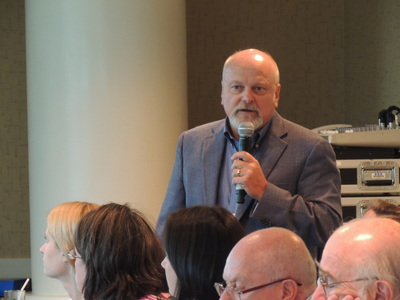 Most people look out at the sparkly blue waters of the Gulf of Mexico and figure it’s perfectly healthy. But Don Boesch, president of the University of Maryland’s center for environmental science says there are plenty of reasons to worry.

“For example, the whole water system in terms of the water that evaporates and comes back down in rain – it removes about 2/3 of the carbon dioxide that we produce excessively.”

A White House climate change report released earlier this year shows that man-made carbon pollution is the biggest culprit in the problem that’s only going to get worse. Climate change puts Florida coast lines at higher risk of flooding, increases the intensity of storms and contributes to rising sea levels that could drown some low-lying areas like MacDill Air Force Base. Boesch says that’s already happening to one Gulf state.

“The toe of Louisiana is basically disappearing before our eyes as that whole delta is degrading.”

The reason that’s happening is largely due to fertilizer runoff from agricultural lands along the Mississippi River. Felicia Coleman is a scientist at Florida State University’s coastal and marine laboratory.

“You know, 41% of the nation, the Mississippi watershed drains down to the Gulf of Mexico and this is where agribusiness for the country is and it’s sometimes using 8-10 times more fertilizer than is necessary to produce the crops that it produces and that excess goes down into this watershed.”

It creates a dead zone where not much can survive. But what’s most troubling, gulf researchers say, is that all of these seemingly isolated problems have a far-reaching affect on the entire Gulf. Coleman describes it as a trickle down effect where impacts to one species can lead to changes in entirely different ones. Take blue crabs for example. She says they were over fished on the Atlantic coast and that led to an increase in a species of snail.

“They’re actually producing a fungus. What that fungus does is kill the marsh. So there are huge swaths of marsh along the Atlantic coast that have been completely destroyed.”

And those marshes that aren’t there anymore served as a barrier protecting the coast line from storms. But if all this science isn’t enough of a reason to convince the general public that Gulf health is a big deal, Kim Waddell with the National Academy of Science’s Gulf research program points out there’s a reason waterfront homes sell for way more than similar homes inland.

“I want to wake up in my bedroom and look out at the sea and the person across the street looks out at my house.”

And an unhealthy Gulf could mean an ugly Gulf. Considering Florida relies heavily on its tourism industry, the economy could take a huge hit as was seen in 2010 when would-be visitors shied away from the Sunshine State after the BP oil spill. It would also wreak havoc on the state’s fishing industry. But Boesch from the University of Maryland points out that industry creates problems of its own.

“Many of our Gulf fisheries depend on towing trills on the bottom to catch shrimp. Well, we’ve discovered there are some consequences of doing that with respect to how that affects the bottom environment, but also, the fact is, when we catch shrimp – a pound of shrimp we’re probably catching about five pounds of little fish that are killed and die and that has consequences.”

The point is, keeping the Gulf of Mexico healthy is an ongoing project. That’s why the Gulf Research Program has scientists from all over the country working to find new ways to study and heal the Gulf. The group is meeting in Tampa through Thursday.