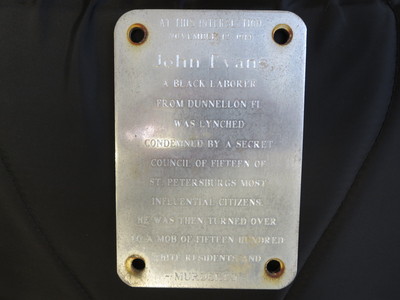 On November 12, 1914, the intersection of 2nd Ave and 9th Street South in Saint Petersburg was the grizzly scene of the lynching of John Evans, an itinerant black farm worker. He was dragged out of the city jail on Central Avenue by 1,500 armed white men to the intersection closer to the African-American neighborhood. But before he was hanged he was shot dead on the pole by an anonymous white woman. The body was pulled down and the crowd — which included white men, women and children — emptied their weapons for 10 minutes on the lifeless body.

Ray Arsenault, USF professor of Florida History and the author of the book, “St. Petersburg and the Florida Dream: 1888-1950,” says this pretrial murder was endorsed by the community.

“It’s made to appear that it’s a crowd out of control. But actually, this lynching was authorized by a coroner’s jury of 15 leading businessmen in the town. They got together and said; ‘we’ve got to make this go away. These headlines are terrible.’ So in a crazy kind of way they thought a lynching would project an image of law and order. So, there was some kind of vote taken and the next thing you knew; 1,500 people appear at the jail.”

The city’s newspaper at the time, The Evening Independent, chronicled the salacious details surrounding the purported murder leading up to the arrest of John Evans, but little or nothing of the lynching or the aftermath. This omission continues until today. James Schnur, USF librarian of special collections and former president of the Pinellas County Historical Society, says the reason for the historical amnesia can be found by following the money trail.

“One obvious reason that news of those types of activities is suppressed, has to do with the fact that today, when we look back at our history, we try to be careful about controversial activities. In the same why in the 1920’s, for an opposite reason, Ocoee, in the Orlando area, and Rosewood in 1923 were area that we tried to talk about in a very suppressed way to prevent tourism and the land boom from being effected.”

Ray Arsenault pointed out what a pivotal year 1914 was in St. Petersburg history and why the historical amnesia got started. He said everything centered on nurturing the economic windfall.

“Of course, everything was done to keep the boom going. In 1914 the city was having one of its first booms. The big boom comes from 1919 to 1926. Kind of the roaring 20’s when the place just explodes with real estate speculation. But in 1914 it was also a big boom.”

Presenting to the public an accurate and complete history, of both the high and low points in Saint Petersburg, could help in understanding the legacy of racial discord. Terri Lipsey-Scott, the executive chair of the board of the Dr Carter G. Woodson African-American Museum, would like to see a more robust representation of African-American history in St Petersburg. She says the major obstacle is finance.

“Funding is critical to any project that you might undertake. Who would be, in fact, would be willing to front the funds to in order to make this knowledge known? That’s critical. So, it’s not so much that I don’t believe the story should be told or that others. But who will fund it?”

How does a place or site become an historical landmark? Saint Petersburg Historic Preservation Department is tasked to investigate and facilitate these kinds of requests. Kim Hinder is the city’s historical preservationist. She says first a proposal is made then investigated by the department. If it clears the department it is then sent to the city council which has to approve it; then it gets funded. This is how the current African-American Heritage Trail in South St Petersburg came into being. When asked about how John Evans might be memorialized, she said something shocking.

“Part of the African-American Heritage Trail project had…I’m not sure if it was engineering. I think it was engineering. They found a small plaque that was on one of the light poles when they were replacing the light poles. And we don’t know when it was put up or why or…it was at the wrong location actually. It was on Central (Avenue) and 9th Street or Martin Luther King jr. Street. So it, I don’t know; it’s about (gestures) that big and it’s just a little bronze plaque that says; this is where John Evans was lynched. But we don’t really know who put it up or why or…nobody seems to know. (Author) ‘Where is it now?’ (Hinter) It’s in our office.”

So we already have had a memorial for John Evans. Historian Ray Arsenault was unaware that such a memorial existed. Reflecting on the plaque after hearing about and seeing it for the first time.

“It’s really quite amazing. It looks to me. I mean it was done in a kind of discrete way. In other words, it wasn’t really meant to stand out. That’s probably why I certainly never noticed it. I’m really amazed that I didn’t know about this.”

Ray Arsenault suggested talking with someone who had conducted oral histories about this time in St Petersburg history. That someone is Jon Wilson.

In the 1980s Jon Wilson, a former journalist and member of the African American Heritage Association of St Petersburg, conducted extensive research about the city’s African-American community. Some of the people he interviewed — many, in their 80s — remembered the incidents surrounding the murder of John Evans. Wilson recalls both black and white people were reluctant to talk about it. He remembers speaking with an eyewitness at a cultural event, who could point out several of the men who were at the John Evans lynching.

“They were dedicating Pioneer Park across from Bayfront Tower. On the dedication day they had a stage set up and a lot of the old pioneers were up on that stage. Coincidentally, a day or two after that, I was speaking with an older gentleman and he started talking about this. He said; ‘some of those people up on that stage yesterday were riding horses around town that day.’ I said; who were they? He said; ‘I’m not going tell you.”

Ray Arsenault has been instrumental in providing St Petersburg with a historical context about the African-American experience. If the city moves forward on a historical landmark to John Evans, he encourages full disclosure.

“I think it’s absolutely essential on historical markers in the kind of public history, as it’s presented, that it be history not mythology. That it be carefully documented and straightforwardly told. It doesn’t have to be sensational, but it has to be warts and all.”

The area where the plaque was found and subsequently removed was called the Gas Plant District. It is in the district of Saint Petersburg City Council member Wengay Newton. He is an African-American city native and was shocked that he had never heard of nor seen the plaque. Newton sees baseball as the main reason for the absence of the John Evans plaque and other memorials in the area.

“Down by the Trop site (Tropicana Field) there’s nothing, because you’ve got 20 or 30 thousand people coming to a baseball game and you don’t want them reading no boards about where you were hanging African-Americans in that area. But that happened. Good, bad and other. It’s convenient that the trail didn’t go that way.”

Former journalist Jon Wilson says there might be good news coming from the African-American Heritage Association of St. Petersburg. Now that they are through with the 1st phase of the Heritage Trail there is time to evaluate the other traditionally African-American neighborhoods. Wilson said the Association is aware of the plaque and its importance.

“That plaque came up a couple of times during meetings. There was chat about; ‘hey, we need to do something about that.’ I don’t know if the word memorialize was used specifically but the idea was (that) we were going to put that back up again. I’m sure I can speak… I’m going to ahead and speak for the Heritage Association. I think it’s very important that we commemorate that 1914 episode.”

There many other historical sites in St Petersburg that are not yet memorialized. They attest to the vibrant contributions and resilience of the African-American experience. Maybe soon a reestablished John Evans memorial landmark will be the first step in addressing the full history of Saint Petersburg and curing a case of historical amnesia. For WMNF, I’m Samuel Johnson in Saint Petersburg.

related: New Times: Florida Lynched More Black People Per Capita Than Any Other State, According to Report