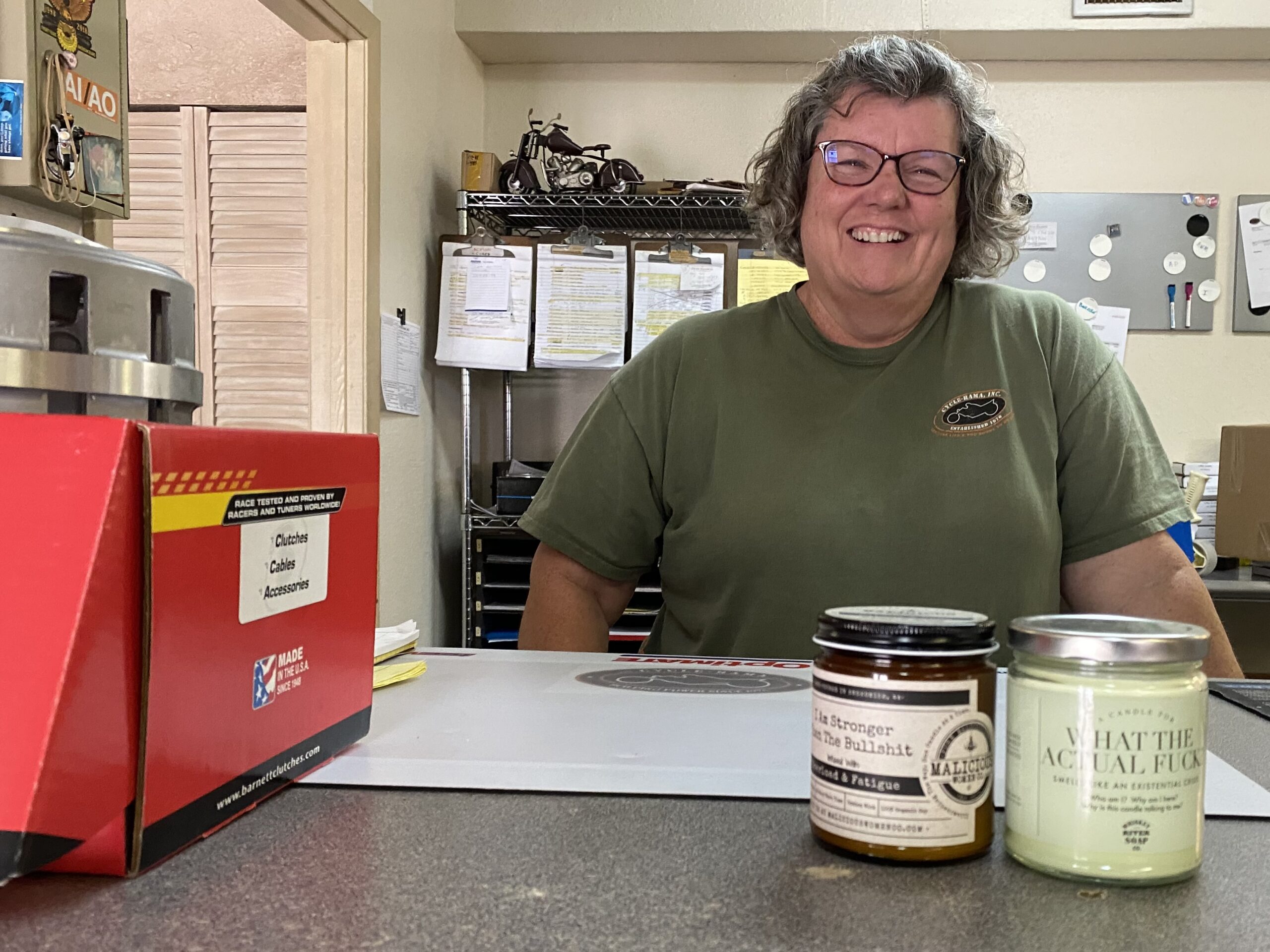 These days, motorcyclists live and die by their Dyno sheets, the ultimate measure of an engine’s power. But when the machines came out in the late 80s, it was a women in Florida who bought one of the first units and helped reshape the world of motorcycling.

Fifty years later Pam Brown remembers how she got her start wrenching on engines with her dad. They’d work on Volkswagen parts together because he happened to need a hand and she was the one who was around.

But when he bought her brothers some single-speed mini bikes, small motorcycles, they were off limits.

“He said I could not ride a motorcycle because you are a girl,” Brown recalled. “Girls don’t ride motorcycles.”

Fortunately for her, Brown’s neighbor had a crush and a full-fledged motorcycle.

Brown is one half of the couple behind Cycle-Rama, a high performance machine shop in Pinellas Park known over the world for building some of the most coveted aftermarket engine parts in the V-Twin motorcycle world. She’s been there for 38 of the shop’s 45-year existence.

But it was in 1989 that Pam Brown put her foot down and made a purchase that helped reshape the world of powersports.

In the late 80s, Mark Dobeck invented the first chassis dynamometer. Before that, a mechanic had to ride a bike to tune it and measuring horsepower and torque was mostly a guessing game. Dobeck’s Dyno allowed bikes to be tested and tuned right in the shop.

Henry Tecza was one of the first to have a dynamometer in his Las Vegas Shop. He said those early adopters changed the game.

“I mean, you had a piece of equipment that was rare in the motorcycle industry,” Tecza said. “It kind of put you ahead of anybody else as having the latest tuning abilities.”

With the dyno, motorcycle mechanics were able to test the power claims made by parts manufacturers and fine-tune a motorcycle’s performance to pull the most out of a bike. These days the machines are staples.

“It’s not uncommon for every serious shop to have a Dyno. It’s a necessary tool.”

Oh my gosh, it’s a girl riding that motorcycle

By 1989 Brown had been in the motorcycle world for almost a decade. She got her start with a parts distributor in Atlanta. She was one of few women in the shop and quickly started out performing some of the men. That earned her a promotion to being the only woman delivery driver and eventually the only woman in the sales department. Women ridership has doubled in the last decade. But at that time, women weren’t prominent in the motorcycle world.

“Even just riding motorcycles,” she said. “When I would get off my motorcycle people were shocked that ‘Oh my gosh it’s a girl riding that motorcycle.’”

The job in Atlanta led to her meeting Wes Brown, Cycle-Rama’s founder. After a few years in Atlanta she moved to Florida to be closer to Wes. She took a job in Tampa with another distributor, but they wanted her to use her voice for more than selling.

“If I’m giving you the right information, you’re gonna buy stuff from me and I know this because I’d been doing it for two-and-a-half years,” Brown said. “But they wanted me to be vulgar. They wanted me to be like a phone sex line and I didn’t agree with that and I wouldn’t do it.”

So, she started working with Wes full time. Within a year, they were married.

When Dobeck came out with his chassis dynamometer, Pam Brown saw it’s potential. Her husband wasn’t so sure.

“I didn’t convince him so much as I strong-armed him into it,” she said. “I said ‘with or without you, I’m buying this machine.’”

Not only did she buy it, she was the one who ran it.

“I used cardboard and duct tape and pieces of plywood and Pepsi cans to change the airflow just to see what would happen,” she said.

Cycle-Rama soon had the first dyno machine in Florida and one of the only ones on the east coast. Companies reached out to have their products put on the Dyno. Brown was able to test all kinds of new parts and help design the company’s own performance components.

“I must’ve dropped their name a hundred times,” he said. “Say oh, well Cycle-Rama has one. It was a great relationship.”

“The motorcycle market I think as a whole can be very tough on women. It’s a bit more male-dominated industry,” Dahmer said. “A lot of guys will either test her or challenge her as far as her knowledge. She knows it inside and out and when you know it inside and out somebody trying to challenge it isn’t going to fare very well.”

But Brown said that doesn’t stop them from trying. Even when it comes to parts she helped design.

“Nothing like getting mansplained your own parts,” she said.

She doesn’t let it get to her though and said other women in motorcycling shouldn’t either. At the end of the day, she’s still one of the best at doing what she loves – helping diagnose and fix engines.

“I ask a lot of questions and then I can see it in my mind because I’ve taken motorcycles apart,” she said. “If I could just do that all day, that would be awesome to me. Just take motorcycles apart to see what happened.”