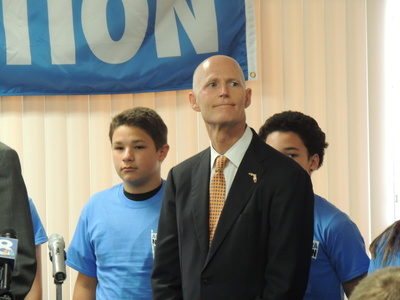 Florida Governor Rick Scott is saying he mishandled the ouster of the head of Florida’s main law enforcement agency.

Scott made the statement at the start of Thursday’s meeting of the governor and Cabinet at the Florida State Fair in Tampa. He did not explain what exactly he could have done differently.

Questions have been raised about Scott’s decision to force out Gerald Bailey, the former commissioner of the Florida Department of Law Enforcement. Bailey said he was pushed out after resisting potentially unethical requests from the Scott administration and his re-election campaign.

But at Thursday’s cabinet meeting, Attorney General Pam Bondi said Bailey is comfortable with his replacement.

By law Bailey reported to the governor and the three members of the Cabinet.

Chief Financial Officer Jeff Atwater asked about doing a new search for FDLE but none of the other Cabinet members supported taking that step.

Agriculture Commissioner Adam Putnam says he’s still worried about allegations that Scott’s chief of staff pressured Bailey to falsely claim the acting clerk of court in Orange County was the target of an FDLE criminal inquiry.

Because of the controversy surrounding the ouster of former FDLE chief Bailey, newspaper editors and open records advocates are taking Governor Rick Scott and the Florida Cabinet to court.