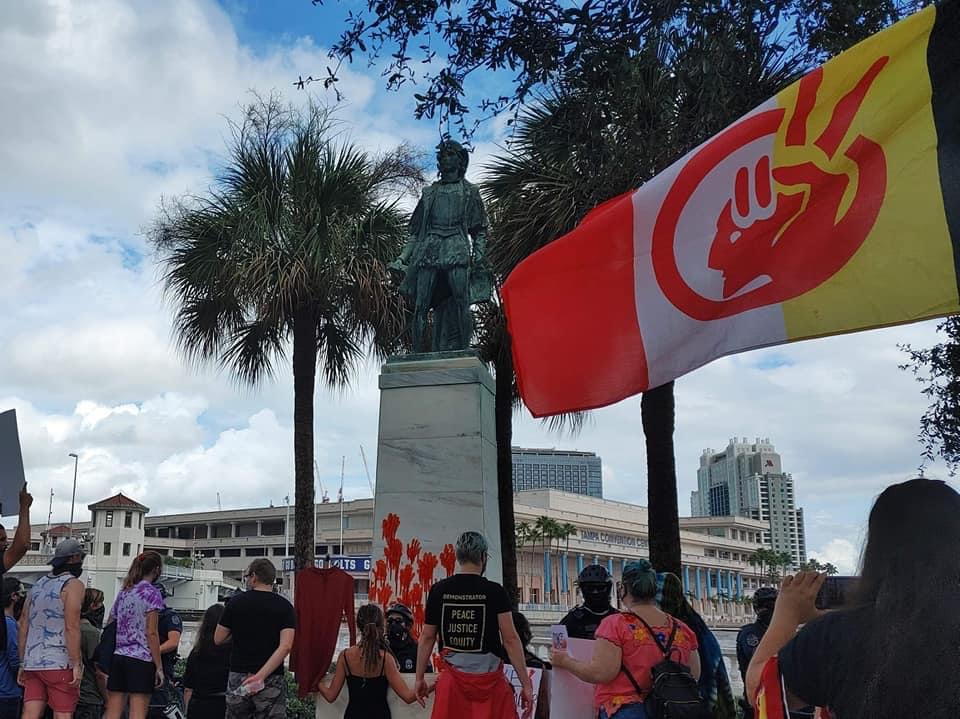 A group of Indigenous rights activists marched through Tampa Sunday, calling for the removal of a Christopher Columbus statue from a city park. The call comes as cities and states around the country have begun to acknowledge the second Monday in October as Indigenous People’s Day.

The rain came and washed the bloodied handprints from the statue’s base and into the small pool below.

For Alicia Norris, co-founder of Florida Indigenous Rights and Environmental Equality, known as FIREE (fiery), it made the groups statement all the more powerful.

“It’s a symbol of genocide. It’s a symbol of the genocidal model and colonialism that came here and destroyed entire tribes,” she said. “The person they’re putting up on a pedestal, he was just brutal.”

FIREE gathered Sunday for a march down Bayshore Boulevard. The group wants Tampa to join the growing number of cities and states around the country that have begun to acknowledge Christopher Columbus might not have been the hero he was once celebrated as.

Indigenous Peoples’ Day was instituted in Berkeley, Calif. in 1992 on the 500th Anniversary of Columbus’s voyage across the Atlantic. It’s meant to honor the often overlooked people and nations who were sacrificed as Europeans settled west.

Norris said Sunday’s march was more of a funeral procession meant to honor the memories of Indigenous people still being lost to the violent colonialism Columbus helped establish.

“We were also honoring the murdered and missing Indigenous women that are still part of the genocidal model in the present day,” she said.

Five body bags laid at the foot of the statue as marchers approached. Activist Stuart Flores dragged two body bags behind him as he marched toward the fountain. On his back, a sign read “We remember Kalinago Calusa” the name of two Indigenous tribes nearly pushed the brink of extinction following European contact.

“That was a representation of the nations that were extinct, that were wiped out by this colonizer, by this individual the City of Tampa still has a statute up of,” Flores said. “I needed the people of Tampa to see what it means to us as Indigenous people that our ancestors suffered extinction.”

Norris said activists have been calling on Tampa to remove the statute for more than 20 years. She said its existence is a sign of disrespect, especially in an area so heavily influenced by Indigenous names and culture. While there is some dispute, the name “Tampa” is believed to come from a Calusa word meaning “sticks of fire.”

“It’s nauseating and offensive,” Norris said. “It would be the equivalent of putting up a statue of Hitler in a Jewish community of holocaust survivors.”

The tale of Christopher Columbus has become fraught with controversy. Norris said he was even considered a brutal leader in his own time. The Italian explorer flew under the Spanish flag at the same time as the infamously violent and oppressive Spanish inquisition. And, though he was eventually exonerated, Columbus was briefly jailed in Spain after investigation into the violent tactics he used to govern Caribbean lands.

Last year, FIREE marched in St. Pete to have a statue of Columbus removed. It came down a few days later, though the City never attributed its removal to marchers.

Flores said removing statues is not about erasing or forgetting history, but remembering it for what it really was and choosing to honor symbols of love rather than violence and hate.

“We want the truth to be told, but we don’t want people to be in turmoil. We don’t want to erase any history. We want the truth to be told of what the real story is because no one wants to hear our story,” Flores said. “They want to see us dance. They want to see us play our flutes. That’s all we are. Tell the truth to the children of how this country was formed and then the love will form. The truth will always bring the love people need.”

The City of Tampa did not respond to a request for comment on this story.